Batman: The Return of Bruce Wayne- The Deluxe Edition

Man, thank God for the internet.

When I was a kid, there was no internet.

And so, if I didn't understand a comic book, which honestly never happened back then, I would be relegated to asking my like-minded friends to explain what I was missing. I always felt that I was smarter than my friends, so they probably would have been of little help.

These days, when I don't "Get" a comic, which is happening with alarming frequency now, I can simply Google something like "What the fuck happens in BATMAN: THE RETURN OF BRUCE WAYNE????", and a helpful know-it-all's explanation will appear, as if by magic.

Good God, even the Wikipedia synopsis made my head hurt.

I have faithfully read all of Grant Morrison's BATMAN run up to this point, and while some of it has been very good, much of it reminds me of the breathless kitchen-sink comics that I used to create as a child. Non-stop action that was filled with big ideas that I never slowed down enough to explain. Shit just happened. And that's how I feel about Morrison as a storyteller: Shit just happens, and if you're not on the same wavelength as Morrison, you're either going to be left in the dust or mowed down. I recently reread all of Morrison's NEW X MEN run, and while it read MUCH better in the Omnibus format, where you could see the ideas and concepts reach full flower, it had that same breathless quality that made me feel like there were huge chunks of stuff that Morrison wanted to convey but just couldn't be bothered actually writing. So things just....happened.

Read more »
Posted by The Crabby Reviewer at 3:42 PM No comments:

Chain Saw Confidential: How We Made The World's Most Notorious Horror Movie 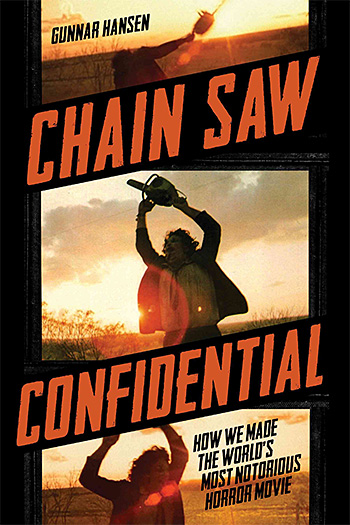 I can't really remember the first time that I saw THE TEXAS CHAINSAW MASSACRE...It was either on a rented Beta-max tape (Or possibly a Laser Disc...) at my friend Bryan's house when I was in my mid-teens, or else it was a grainy VHS tape that I watched with my younger Cousin Rob when I was in my late teens. I sure as hell remember my reaction to the film, though...It was identical to the comment made by Director John Landis (of AN AMERICAN WEREWOLF IN LONDON fame): "Who made this....?"

CHAINSAW is such a vivid, realistic film that watching it evokes a reaction akin to being punched in the sack. I've often wondered what the people that made the film were like, and what it entailed making such a horrific film...Thanks to Gunnar Hansen, I now know.

Hansen, of course, famously portrayed Leatherface, wielder of the movie's titular chainsaw. Upon learning that he had written a book about the experience of making the film, I immediately assumed that it was ghostwritten, because surely Gunnar Hansen must be a slightly demented, hulking doofus that can barely string together two coherent sentences, let alone write an entire book on his own, right? Well, a quick internet search would have proven me wrong, because Leatherface, while certainly looking good on a resume, is hardly Hansen's claim to fame: The man is a respected Author, having written books of Poetry, as well as Travel and History books. And there's not a Ghostwriter in sight...

I was, however, correct in my assumption that there must have been some kind of madness at work, fueling the making of this film. Hansen tells some alarming stories of close calls with the chainsaw, and actors who could have been killed performing their own stunts. There's a kind of "Hey, gang! Let's put on a show!" mentality that permeated the production, encompassing both cast and crew, and as more than one person associated with the film says in the course of the book "Someone must have been watching over us."

Read more »
Posted by The Crabby Reviewer at 1:38 PM No comments:

I'm a little behind in my reading, so I'm just now getting to this magnificent celebration of Usagi Yojimbo's 25th anniversary, originally issued in 2009 by Dark Horse Comics. USAGI YOJIMBO: YOKAI is a real treat for fans new and old.....a deluxe hardcover original graphic novel, with a gorgeous embossed, spot-varnished cover, with full-color watercolored interior art. Sakai manages to make this story totally accessible to new readers, which is nothing new for him, but always amazes me. In this age of dense, impenetrable continuity that almost defies a new reader to try to gain entry, Sakai's USAGI YOJIMBO books are incredibly welcoming to neophytes.

The story is quick and simple: Usagi is drawn into helping a woman find her missing Daughter, who has been spirited off into the woods by a Fox. Unfortunately for Usagi, it is Oborozuki-yo, the night when Demons walk the Earth, and this time, they're not content to merely scare people...they're planning to take over the world.

Sakai populates YOKAI with all manner of Japanese Demons and spirits, and his art brings them to life wonderfully. The main story runs 56 pages, and the book is rounded out by a brief, but informative, interview with Sakai about his art techniques and the history of Usagi Yojimbo.

Posted by The Crabby Reviewer at 8:43 AM No comments: One of my pet peeves is seeing someone in an executive position at a comic book publisher decide that something that they wrote is good enough for his company to publish. It could be great, but most people will assume that it sucks and was greenlit because of the Author's place in the food chain......but mostly they suck, and it cements in your mind just why this guy is publishing instead of writing full-time. That brings me to THE COLONIZED......

Read more »
Posted by The Crabby Reviewer at 10:55 AM No comments:

First off, this is why I buy collected editions, right here. Because chances are, that monthly is going to be late, or get canceled, or remain unfinished for years, or potentially forever. After getting burned enough times, I just learned to wait. Marvel starting publishing THE TWELVE in 2008, and it was published monthly for around eight months, until it was put "On hold" for a variety of reasons, starting with Author J. Michael Straczynski's screenwriting career. It was eventually finished, and released, in mid-2012. Ouch. Straczynski has a long history of super-late books, of which this is just one. I bought the first hardcover collection of THE TWELVE, which collected the first six issues, way back in 2008, and here I am reading the conclusion around FIVE YEARS LATER. Awful. More after the jump....

Read more »
Posted by The Crabby Reviewer at 4:31 PM No comments:

Batman, Volume 3: Death of The Family

OK, so it's been a year since The Joker had The Dollmaker slice his face off in the abysmal first issue of Tony Daniels' DETECTIVE COMICS, and not just in "real life"....It seems that a year has passed in Gotham City, as well. Scott Snyder and Greg Capullo's BATMAN, VOLUME 3: DEATH OF THE FAMILY sees The Clown Prince of Crime return from his exile to exact his chilling revenge on Batman's friends, associates, and loved ones. More after the jump....

Read more »
Posted by The Crabby Reviewer at 12:50 PM No comments:

Batman: Night of The Owls

DC's brilliant collected editions masterminds have done it again! How is a reader supposed to know what issues are being collected when the people publishing the book don't even know...?

BATMAN: NIGHT OF THE OWLS lists it's contents in the indicia as ALL-STAR WESTERN #9, BATMAN #8-11, BATMAN ANNUAL #1, BATMAN: THE DARK KNIGHT #9, BATMAN: DETECTIVE COMICS #9, BATGIRL #9, BATWING #9, BIRDS OF PREY #9, NIGHTWING #8-9, BATMAN AND ROBIN #9, CATWOMAN #9 and RED HOOD AND THE OUTLAWS #9. The front cover flap, however, lists issues 8-9 as the only issues of BATMAN being collected. Issues 8-9 are correct, along with the Annual, but that leaves readers hanging, with no resolution to the central conflict depicted in the book. The book does, however, end with a short story (Which I assume was a backup story from BATMAN...) that totally ruins a major plot twist that is probably revealed properly in the BATMAN: THE CITY OF OWLS collection.  (Which is up next on my reading list.) So, aside from endless curses directed at DC's haphazard Production Department, how does the actual product stack up....? More after the break....

Read more »
Posted by The Crabby Reviewer at 10:33 AM No comments:

Wow, was that disappointing.

Gail Simone has done some stellar work on DC's BIRDS OF PREY and SECRET SIX, so I was looking forward to reading her take on Batgirl, especially since she had made Barbara Gordon such a compelling character in BIRDS OF PREY.

First off, Barbara is no longer confined to a wheelchair. The timeline of "The New 52" is driving me nuts, because Bruce Wayne is only supposed to have been Batman for about six years, but DC wasn't really willing to commit to a full reboot, so he's only been Batman for a short time, yet he's still had a slew of Robins, he raised Dick Grayson, who is probably around the same age as Batman in this new universe, he's been broken by Bane and recovered, Batgirl has been shot by The Joker and recovered...it's been a busy six years. Anyway, the timeline drives me nuts. Was Barbara ever Oracle? It's not clear from this volume....no mention is made, at least not yet.

Simone unwisely uses her first six issues to introduce two incredibly uninteresting new villains: The Mirror and Gretel. Both are good people done wrong, who decide that wanton death and destruction are good ways to follow up on the bad hand that life has dealt them. As a plot device, this always bothered me. Put this in a real-life context, and you'll see how ludicrous it is: Imagine if a close relative was killed, and that loss drove your Mother to become a Super Villain. Well, it's just as ridiculous here, times two. I could probably buy The Mirror, maybe.....He was a war hero, so I can see how he could physically stack up to Batgirl, but Gretel...? Getting shot in the head gives her the power to control men's minds? Sloppy and lazy.

This is probably my least favorite Gail Simone book. She's always been hit-or-miss for me, with even her misses being at least semi-enjoyable, but this was just awful. It took me forever to slog through the six issues collected in BATGIRL, VOLUME 1: THE DARKEST REFLECTION, and if it wasn't for the attractive art by Ardian Syaf and Vicente Cifuentes, I'd call this a complete disaster.

BATGIRL, VOLUME 1: THE DARKEST REFLECTION collects issues 1-6 of BATGIRL, complete with covers and a small sketch gallery by Jim Lee, Ardian Syaf, and Adam Hughes. I already bought Volume 2...it's gotta be better than this, right....?

Posted by The Crabby Reviewer at 3:43 PM No comments: