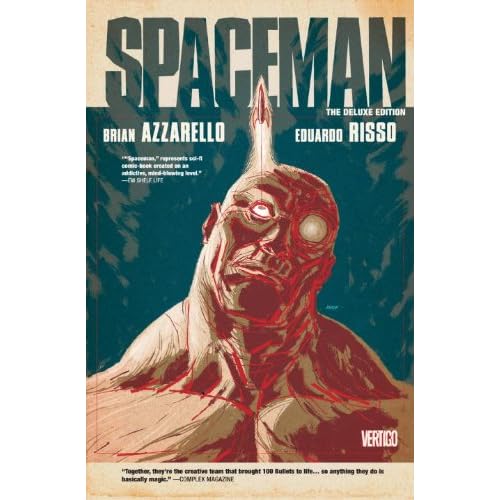 Don't be fooled by the Sci-Fi trappings, SPACEMAN is pure Noir. Creators Brian Azzarello and Eduardo Risso (Aided and abetted by Cover Artist Dave Johnson) tell the story of Orson, a genetically-engineered Human created by NASA to withstand deep-space travel. After the media breaks the story of their creation, NASA is disbanded, and Orson and his "Bradahs" are left to fend for themselves on a devastated Earth. Orson makes his living salvaging scrap from the flooded remains of a ruined city. His life takes an unexpected detour when he stumbles upon Tara, a young kidnapping victim. (Tara is one of the stars of "The Ark", a truly twisted reality show in which multinational orphans compete to be adopted by a Brad-and-Angelina-like celebrity couple.) Orson saves Tara, setting the stage for an adventure reminiscent of Luc Besson's film THE PROFESSIONAL. Orson and Tara are pursued by Cops, killers, gangsters, and Tara's own Reality-TV producers, as well as one of Orson's fellow Spacemen, a hulking Bounty-Hunter named Carter. As I said above, this is pure Noir.....take away the futuristic setting, and this could have been a 1940's movie.

I've never really been a fan of Brian Azzarello's Writing, and SPACEMAN still hasn't converted me. The ending didn't quite pull together in a satisfactory way, and the pidgin language that most of the story is told in was very distracting to me. Risso's art is outstanding, though, as are Dave Johnson's covers. SPACEMAN is a chunky read, clocking in at well over 200 pages, so it's a real bargain at this price. The book collects all 9 issues of the mini-series, complete with covers, as well as the prologue from STRANGE ADVENTURES #1. DC/Vertigo provided a review copy.
Posted by The Crabby Reviewer at 4:43 PM