I'm pretty sure I already said another Avengers story was the greatest of all time, but...whatever. This is a real roller coaster of emotion, courtesy of the legendary team of Roger Stern, John Buscema, and Tom Palmer.

AVENGERS: UNDER SIEGE collects THE AVENGERS #'s 270-277, which finds the team attacked and humiliated, in their own headquarters, no less!, by The Masters of Evil. (These are no ordinary evil people...they are The MASTERS of Evil!!!)

The collection opens with the team dealing with the public relations fallout from their recent decision to offer membership to Namor, The Sub-Mariner. People are still a little miffed at all of that "Conquer the surface-world" stuff that he tried occasionally. The first few chapters of this book deal mainly with Namor's many problems, ranging from a massive lawsuit filed against him for property damage to his failed attempt to free his lost love Marrina from the clutches of Attuma. (This section of the book is a little bit choppy, mainly due to it being a crossover with ALPHA FLIGHT. This collection does not include the ALPHA FLIGHT issue, so I would recommend skipping this hardcover and getting the UNDER SIEGE EPIC COLLECTION. I was going to pick up the ALPHA FLIGHT issue digitally, but skipping it didn't seem to impair my enjoyment of the story arc. Pretty much everything you need to know is shown here. Alpha Flight is present in the AVENGERS issue of the crossover, but the do virtually nothing but stand around and take up background space. I'm glad I saved the buck or two that digital issue would have cost me.) While the Namor drama is playing out, longtime Captain America foe Baron Zemo is busy breaking various bad guys out of prison to aid in his master plan: Hurt Captain America by making him witness the defeat and deaths of his friends and teammates.

As Roger Stern states in his 1998 introduction to a prior collected edition (Reprinted in this volume), this story arc also serves as an origin story of sorts for The Thunderbolts, as almost that entire team is represented here in some fashion, save for The Beetle. Zemo's plan is fiendish in its thoroughness: He gains intel from a variety of sources, including a drunken Hercules, handpicks team members who will be specific matches to certain Avengers, and makes sure that anyone who could assist the heroes are otherwise occupied.

What follows is probably as close to a great action movie as you can get on the printed page. You know, those action movies where you just...cannot...wait...for the villain to get his ass kicked for all of the horrible things that he has done. Zemo and company systematically take the team apart, looting and destroying their mansion headquarters, nearly beating Hercules to death, torturing their Butler, Jarvis, to within an inch of his life.....they even make Captain America cry. These guys are a bunch of bastards, and you will be itching to see them get theirs by the time you get to the end of this book.

This is really  good stuff. SO good that it was collected back in a time when collected editions were few and far between. The timeless work of Stern, Buscema, and Palmer holds up flawlessly. If I had any complaint, it was that the cover image that Marvel picked reveals a little too much of events that happen near the end of the storyline. There is only one extra, but it's a goodie: The painted John Buscema/Joe Jusko cover to the original collected edition of this arc. Oh, for the days when collected volumes had brand new covers exclusive to that edition..... 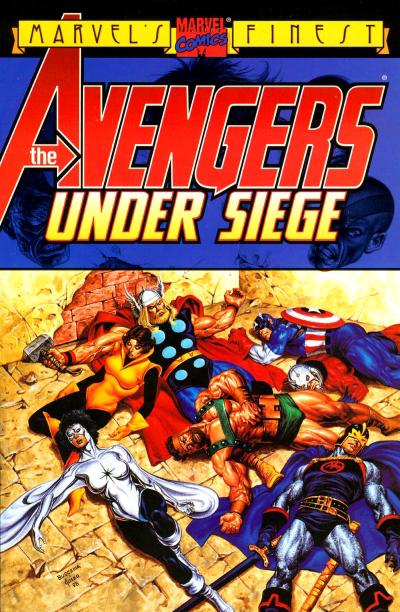 Awesome stuff. If you only ever read on AVENGERS story...make it this one.
AVENGERS: UNDER SIEGE earns nine out of ten devil heads!
😈😈😈😈😈😈😈😈😈


Posted by The Crabby Reviewer at 1:16 PM