Your New Job Title Is "Accomplice", by Scott Adams 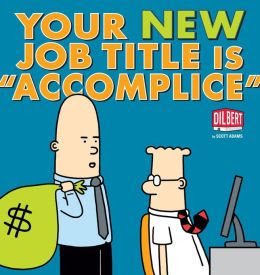 Here, at last, is proof that we do, indeed, grow and change in the course of our lives. I used to think Dilbert was funny stuff, back when I worked in Corporate America. Bosses and drones alike would clip the strips from the newspapers, and hang them in cubicles, copy and distribute them, share them at meetings, and we would all have a good laugh and say "It's funny because it's true!" I still have an office job, albeit one pretty far removed from your usual corporate setting, but I do still work with crabs, lunatics, drunks, credit-stealers, Bosses who don't listen to a thing you say......and in the course of the 130 pages that comprise YOUR NEW JOB TITLE IS "ACCOMPLICE" I smiled a grand total of twice. I didn't laugh of chuckle at all, I smiled.

Mostly I was amazed by how repetitive and tired Scott Adams' jokes were. This is the same dreck that he was publishing decades ago! The art and writing is exactly the same, as are the jokes. This was truly a chore to get through. On the plus side, it did show me that my sense of humor has evolved, and for that, I am grateful.

Andrews McMeel Publishing provided review copy.
Posted by The Crabby Reviewer at 9:05 AM No comments: 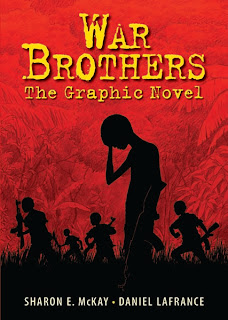 This is powerful stuff.

WAR BROTHERS: THE GRAPHIC NOVEL is an illustrated adaptation of a prose novel written by Sharon E. McKay in 2008. Artist Daniel LaFrance masterfully adapts the story of Jacob Kitino, a young boy abducted from his school in Africa and forced to fight in Joseph Kony's  "Lord's Resistance Army". The plight of these "Child Soldiers" is absolutely heartbreaking, and the story McKay and LaFrance tell is both terrifying and utterly absorbing. I can't recommend this book highly enough.