The Border, by Robert McCammon


I have to start by being totally honest: I rarely, if ever, read Science Fiction. And that's what Robert McCammon's new novel, THE BORDER, is, despite the back-cover copy that describes it as "...a triumphant return to the epic horror and apocalyptic tone of his books Swan Song and Stinger..." There are certainly horrific elements, but this is a Science-Fiction book. 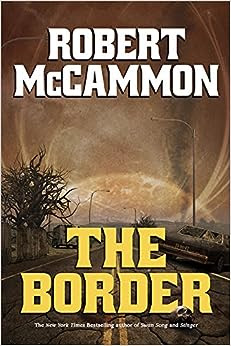 More truth in reviewing: A few years ago, I was describing a book that I was reading (Rick Yancey's THE MONSTRUMOLOGIST, which I highly recommend) to my friend Steve, and he stopped me dead by asking if the book, which has a young boy as its protagonist, was a "magical child" book (It's not.). I had never heard this term before, so he went on to explain that a "magical child" book is one that revolves around a young boy or girl who is gifted with strange, mysterious powers that allow them to, inexplicably, overcome all obstacles that are thrown at them, until they finally grow to understand what the powers mean, where they came from, and how to use those powers to overcome whatever force me be arrayed against them. Upon hearing this, I realized that I, without even knowing it, hated this particular sub-genre myself, with a passion. THE BORDER is a "magical child" book.

So McCammon had two strikes against him pretty much right off the bat.

The first hundred pages or so of THE BORDER were tough going, and if a lesser-known author had written the book, I probably would have put it down and never returned to it. But this is Robert McCammon, whose Matthew Corbett series has had me firmly under its spell for the past year, so I gave him the benefit of the doubt, and kept plugging away.

I'm glad I did. THE BORDER, it turns out, is one of the best books of any genre that I have read in quite some time.

McCammon opens up with an Earth already decimated by the collateral damage of two warring alien races: The Cyphers, a hybrid race of organic machines, and their eternal enemies, The Gorgons, a snakelike species straight out of humanity's collective nightmares. Civilization as we know it is finished, and small pockets of humans attempt to stay alive. For the most part, the survivors are beneath the notice of the warring aliens, who only have eyes for each other as they war over the titular "Border" between their two contested territories. The survivors main worries are food, shelter, and the nightly threat of "The Gray Men", humans who have been mutated by the pollution caused by the alien war machines.

In the midst of this chaos. we meet Ethan Gaines, a young man who should be dead, judging by the horrific bruises and discoloration he bears. Ethan has no memory of anything that happened before he regained consciousness in the middle of a battle between Cypher and Gorgon troops in the parking lot of the Ethan Gaines High School, from which he ends up taking his new name. Ethan is rescued by a group of survivors and taken to their refuge in a fortified apartment complex, but it doesn't take long before the ragtag group starts to suspect that there is more to the new arrival than meets the eye. Ethan begins to manifest powers that he uses to repel a Gray Man assault, and causes an earthquake that gives the community access to an unpolluted source of water. When their home is destroyed by a crashing Gorgon ship, the remaining members of the community agree to follow Ethan, who wants to lead them to "The White Mansion" that he saw in a dream. The path to this possible salvation will lead them through a wasteland populated by hundreds of thousands of cannibalistic Gray Men, and draw the attention of both The Gorgons and The Cyphers, who cannot allow Ethan to reach his goal.

I was reminded of the TNT series FALLING SKIES in the beginning part of the book, but McCammon ultimately rises above his seemingly old-hat premise and delivers a truly extraordinary book. By page 150, I was thoroughly hooked, and could barely bring myself to put the book down. McCammon's true gift lies in his ability to craft realistic characters that readers grow to care about...without that connection, it's just weird aliens causing property damage.

I'm sure there's going to be a massive audience divide when it comes to the ending. I can't recall reading such an obviously divisive ending since Brian Keene's THE RISING. Personally, I loved the ending of both books, and I honestly can't imagine any other way McCammon could have possibly ended this story. I'm eager to see what others think once they've had a chance to read it for themselves.

THE BORDER is a staggering achievement in post-apocalyptic fiction, and another home run for McCammon, one of the most important genre authors that we have.

Posted by The Crabby Reviewer at 9:50 AM