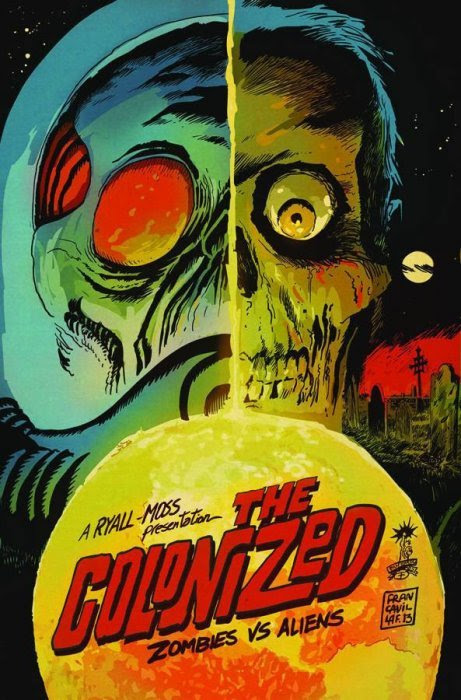 One of my pet peeves is seeing someone in an executive position at a comic book publisher decide that something that they wrote is good enough for his company to publish. It could be great, but most people will assume that it sucks and was greenlit because of the Author's place in the food chain......but mostly they suck, and it cements in your mind just why this guy is publishing instead of writing full-time. That brings me to THE COLONIZED......
Chris Ryall is" Chief Creative Officer and Editor-in-Chief of IDW Publishing", in his own words.....Is this not enough to keep him busy? Must he write as well? Must he take up a slot on IDW's publishing schedule that could go to someone more deserving? Someone with actual talent? On the plus side, THE COLONIZED is the first book written by Ryall that I was actually able to finish. On the minus side, that's not to say that it was good.

The book starts off with an introduction by Nick Redfern that makes it sound like you're about to read the most original work of fiction that's come along in a dog's age. We've all seen Zombies before...we've all seen Aliens before....but Zombies AND Aliens AND rednecks????? Move over, Shakespeare,  you fucking hack!!!!!!

My first bone of contention was the rednecks, who are actually militiamen who live in a fully-functioning separatist community. There are a few token black and Hispanic people in this community. Bullshit. There's nothing a redneck hates more than a minority, especially the kind of redneck that's withdrawn from the world and started their own armed-to-the-teeth enclave. So there's that. (I know...."Are you expecting realism from your Zombies vs. Aliens story, Dan....? I guess...at least a little.)

OK, Aliens come, and accidentally re-animate the dead crazy white people that are buried in the town's cemetery (For a little town, they have a HUGE fucking graveyard! These fuckers must have some high-ass mortality rate! They need some Obamacare, stat.) The Aliens decide to help the townspeople, who are half crazy hillbillies and half rational, normal people. Chaos ensues.

This is just a dismal, shitty book....IDW publishes some great stuff, but they also do a lot of real lowest-common-denominator type books that are nowhere near ready to have people pay to read them. This is one of those. The art, by Drew Moss, is decent, if a little too cartoony to always work, and the book is slightly redeemed by the extensive cover gallery, featuring work by, among others, John Byrne and Dave Sim. But that's hardly enough to save this wretched cash-grab that was obviously created with a movie deal in mind.
Posted by The Crabby Reviewer at 10:55 AM