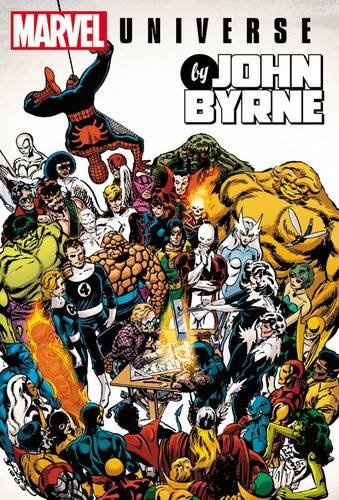 My mega-Avengers-marathon continues, in a roundabout way....

I slotted MARVEL UNIVERSE BY JOHN BYRNE OMNIBUS into the marathon because it contains fourteen AVENGERS issues penciled by Byrne, but this massive (Forty-nine issues!!!) omnibus has soooo much more going for it. (Yeah, I'm a Marvel Omnibus fanatic!)

Under the dustjacket lurks a magnificent wraparound cover that features slices of some of the covers of issues collected in this volume. While I liked the old black-board covers of Omnis gone by, this new, colorful approach to the cover boards also looks great.

The book collects Byrne's work sequentially, and starts off with issues 11-15 of THE CHAMPIONS, all written by Bill Mantlo. THE CHAMPIONS was NOT a good book, but Byrne contributes some great early artwork to this handful of stories featuring The Stranger, Giant-Man, Darkstar, and Swarm.

From there, we jump into 1977's MARVEL PREVIEW #11, featuring an excellent Chris Claremont/John Byrne/Terry Austin STAR-LORD story. This is a story I've loved ever since Marvel did a spiffy color reprint in the early '80's, and it's presented here in its original black-and-white state. The story holds up well, and the most amazing part of it is something I never noticed before: One of the villains is named "Rruothk'ar, Sith-Lord of The Ariguan Confederacy"!!! This came out the same year as STAR WARS, but had to have been in the pipeline long before that film was released...and did they even mention the word "Sith" in the first film....? An interesting tid-bit, to be sure.

Next up are Byrne's AVENGERS issues, which are broken up into two chunks, due to the chronological nature of this volume. First up are AVENGERS #'s 164-166, which finds The Avengers pitted against The Lethal Legion and Count Nefaria. Epic stuff, written by the underrated Jim Shooter.

We break away from THE AVENGERS for a three-issue run of POWER MAN (#'s 48-50), written by Chris Claremont, which features the genesis of the legendary Power Man & Iron Fist team. What a great bunch of issues!

This is followed by a two-issue run on MARVEL PREMIERE (#'s 47-48) which feature Scott Lang's first outing as the new Ant-Man.

Back to THE AVENGERS for issues 181-191...what an iconic group of issues! The team deals with Agent Gyrich's government-mandated pruning of the roster, they battle The Absorbing Man, help unravel the mystery of The Scarlet Witch & Quicksilver's parentage, face the first of what would be many "Evil Scarlet Witch" problems, visit Attilan and The Inhumans, battle The Elements of Doom in The Soviet Union, square off against The Grey Gargoyle...wow. There's even time for a brief digression as former Avenger Hawkeye goes toe-to-toe with future X-Men villain Deathbird. I really miss old-school Marvel...stories that had continuing, evolving sub-plots, scenes with supporting characters, when not everything was an Earth-shattering epic or part of the latest shitty mega-crossover....This is a GREAT run for Earth's Mightiest Heroes.

Next up is ANOTHER classic, legendary Byrne run on a title, as he teams with the great Roger Stern for CAPTAIN AMERICA #'s 247-255, which feature Dragon-Man, The Machinesmith, Nick Fury and S.H.I.E.L.D., Batroc, Mister Hyde, Baron Blood and the remnants of THE INVADERS, THE definitive Captain America origin, and Cap's aborted run for President of The United States. This is a run that ended WAAAY too soon.

A done-in-one story from SILVER SURFER #1 is next, plotted and illustrated by Byrne and scripted by Stan Lee. I've never really been much of a Surfer fan, but this is a truly epic story, and features a magnificent Surfer/Mephisto battle for the ages.

Byrne's short stint on THE INCREDIBLE HULK (#'s 314-319 and MARVEL FANFARE # 29) are next, and they feature a destructive, mindless Hulk rampaging his way across the American southwest, freed from the moderating influence of Bruce Banner, who has been physically separated from The Hulk. Ol' green-skin battles various Avengers, Doc Samson, and She-Hulk, and Bruce and Betty finally tie the knot. Great stuff, cut short by Byrne's temper causing him to quit prematurely.

The omnibus concludes with the seven-issue WOLVERINE arc that Byrne collaborated on with writer Archie Goodwin and inker Klaus Janson. Goodwin's wonky tale gives closure to Wolverine's adventures in Madripoor, as Logan clashes with a South American dictator and his aged Nazi cyborg henchman. Byrne's art is marred by Janson's inks, however...they're just not a good fit.

The collection concludes with a huge selection of Byrne ephemera, including:
His earliest Marvel work, from the pages of FOOM.
A censored panel from Avengers #182.
A pin-up from MARVEL FANFARE.
Six pages of art from the never completed CAPTAIN AMERICA #256, along with a selection of covers from various collected editions of the Stern/Byrne run, and Roger Stern's introduction to that volume.
Articles from MARVEL SPOTLIGHT: CAPTAIN AMERICA and MARVEL AGE, as well as pin-up art from MARVEL AGE and THE OFFICIAL HANDBOOK OF THE MARVEL UNIVERSE: DELUXE EDITION, and WOLVERINE #1.
An INCREDIBLE HULK letters page that features brief essays from Byrne and editors Don Daley and Denny O'Neil.
The cover of STARLORD MEGAZINE #1.
A massive selection of original art from THE CHAMPIONS, MARVEL PREVIEW, THE AVENGERS, POWER MAN, MARVEL PREMIERE, CAPTAIN AMERICA, THE INCREDIBLE HULK, MARVEL FANFARE, and WOLVERINE.
Re-colored covers from various AVENGERS, CAPTAIN AMERICA, SILVER SURFER, HULK, and WOLVERINE COLLECTIONS.

As always, Marvel does collections right, and leaves no stone unturned. This is a beautiful book, and it took me the better part of a month to get through it. I'd already read most of these stories, some of them numerous times, but they still hold up, and still entertained me immensely. Byrne did a ton of work for Marvel, so here's hoping for volume two. Highly recommended.

Posted by The Crabby Reviewer at 7:01 PM