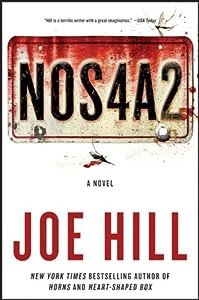 This is one hell of a book.

I grew up reading Stephen King...literally grew up. I read NIGHT SHIFT when I was seven years old, and quickly moved on to CUJO, 'SALEM'S LOT, and THE SHINING. King has always been a favorite of mine (At least until the last three books in the DARK TOWER series, but don't get me started on that....), and perhaps the best thing I could say about NOS4A2 is that Joe Hill gave me that old-school Stephen King feeling. And I'm not saying that because he's Stephen King's Son, I'm not saying that because it's anything like any book King has ever written....I'm saying that because it took me back to the lean, purposeful, razor-sharp books that King wrote in his heyday. NOS4A2 is a massive book, but it's an intimate epic. Hill tells a huge story that revolves around a handful of characters, and those characters became so real to me that, as I approached the end, I struggled with balancing my need to find out how it was going to end with my desire to pace myself so the book wouldn't end so quickly.

In NOS4A2, Hill creates two of the more memorable characters in recent years, "The Brat", A.K.A. Victoria McQueen, and Charles Talent Manx, the titular Nosferatu. We first meet Victoria (Vic) as a spirited little girl, just as she discovers that she possesses an amazing talent: She can use her bike to "Find" lost things...by riding her bike across a condemned bridge near her house, and concentrating on the item she wishes to find, she can come out on the other side near the thing she is seeking. The ability to cross over comes with a price, of course, and each "finding" trip ends with Vic severely weakened and bedridden. As she gets older, Vic decides to find someone who can tell her more about her abilities, and she meets an odd young woman who can use a bag of Scrabble tiles to divine answers to any question she asks. And it's here, talking about other strangely gifted individuals, where Vic first learns of Charles Manx, a strange old man who prowls the roads of America in a 1938 Rolls-Royce Wraith, abducting children and murdering their parents, with the assistance of "The Gas Mask Man", Bing Partridge, a simpleminded lunatic who longs to join Manx and his victims in "Christmasland" a bizarre, otherworldly amusement park of Manx's creation. Vic is warned to steer clear of Manx, but it isn't long before she rides out to "find" one more thing (She literally rides out "looking for trouble"), and finds herself face-to-face with Manx and his latest victim.

Most books would have ended there, but that's just the beginning of what Hill has in store for us. Vic, Manx, and Bing are all changed forever by their first encounter, and not for the better. Vic marries and has a child, and becomes a famous Children's book Author/Illustrator, but remains haunted by her meeting with Manx, and struggles with addiction and mental illness. (Or so she thinks, having convinced herself that the trips across "The Shortaway Bridge" and the chilling phone calls from the children of Christmasland are all figments of a sick mind...) Vic spends some time in an institution, Bing spends some time alone, pining away for Manx and Christmasland, and Manx spends some time in a morgue, but the three are eventually drawn together again when Manx comes for Vic's Son, Wayne, planning to take him away to Christmasland, where every morning is Christmas, and where Wayne will join the hundreds of Manx's other eternally young victims....

Hill has created some memorable characters here, and he uses every one of NOS4A2's nearly 700 pages to great effect. There were times when I thought the novel may be getting away from itself, but by the end I was convinced that there was nothing that could have been trimmed. There's no fat...It's all in service of the story.
Hill fills the book with tropes that will be instantly familiar to Stephen King fans: The child with strange powers (FIRESTARTER, THE SHINING) , the dim-witted lunatic who becomes thrall to a greater evil (THE STAND, IT), the recurring motif of bridges and tunnels (Larry Underwood's trip through the Lincoln Tunnel in THE STAND, The Oatley Tunnel in THE TALISMAN), the "Evil Car (FROM A BUICK 8, CHRISTINE, MILE 81), which no doubt contributed to the massive old-school King vibe I described earlier, but Hill's story is it's own beast....It's a powerful Horror/Fantasy that stands proudly alongside Hill's other epic, the Graphic Novel series LOCKE & KEY, which he references a few times in the course of the story. (He also references King's IT, which will no doubt send fans into a full-on geekout. Yes, I geeked out when I read the reference.....sue me!) I wasn't crazy about Hill's last book, HORNS, but he really won me back, and then some, with NOS4A2.

The book also contains a pleasant surprise that I was totally unaware of until I started reading it: It contains illustrations by Hill's LOCKE & KEY collaborator, Gabriel Rodriguez. I've become quite a fan of his art, and he's doing the same kind of gig for the Subterranean Press edition of THE SHINING that's coming out later in 2013. His work here was good enough to convince me to pull the trigger on ordering a copy.

I'm really going to be beating the drum hard for this book....so far, it's the best book I've read in 2013. I realize that the year is young, but I've read almost 60 books already, and nothing else has come close. I've heard other people whose opinions I respect say that this book just didn't work for them, and I kept waiting for Hill to drop the ball as I read, but it never happened....NOS4A2 is a brilliant piece of Horror Fiction, and will, I predict, be hailed as a classic in the not-too-distant future.

Posted by The Crabby Reviewer at 7:32 PM