Batwoman, Volume 2: To Drown The World 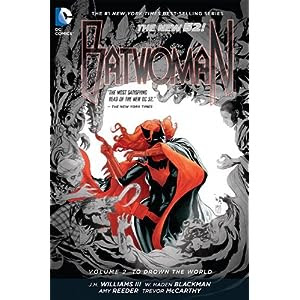 Man, was that a disappointment.
Over the past two days, I've read BATWOMAN: ELEGY (It was ok...), and BATWOMAN, VOLUME 1: HYDROLOGY (It was great!), and now I'm wrapping things up with BATWOMAN, VOLUME 2: TO DROWN THE WORLD, and ....wow, I hated it.

First off, I think a lot of the allure of the book is due to the art by J.H. Williams III, which is nowhere to be found in this collection. The art chores are handled by Amy Reeder and Trevor McCarthy, both of whom are fine artists in their own right, but they're not in Williams' league. As for the story....Volume 1 finished with Batwoman defeating La Llorona, and vowing to find the children that she had kidnapped. Volume 2 picks up with Kate attempting to do just that, and picking up some payback for her Cousin Bette's hideous injuries, sustained at the hands (Actually the hook...) of another anonymous Gotham City weirdo.The story unfolds in numerous flashbacks, and is told from several points of view, including Batwoman (Kate Kane), her Father, her new girlfriend, Maggie Sawyer, Agent Chase, and the Villain of the piece, a weirdo named Maro. The story would have been better served had it played out in a more linear manner, and a lot of that has to do with the art. Williams has the chops for this kind of story...Reeder and McCarthy do not. It's also a frustrating read because the story arc that TO DOWN THE WORLD collects doesn't really have an ending....it has a stopping point, but it leaves the reader almost exactly where they were when it started. I was really high on BATWOMAN after reading HYDROLOGY, but this volume took all of the wind out of my sails....I've pretty much lost interest. (I did feel invested in the Bette/Flamebird subplot, and that might get me to come back for Volume 3, if it's followed up on in  big enough way.) Williams needs to return as BATWOMAN's Artist, or this book will not be long for this world.

DC Comics provided a digital review copy, which was maddening to read, due to all of the double page spreads and artwork that loops around all over the place. I love e-books, but I hate reading Comics digitally. Give me a nice hard copy any day of the week.

Posted by The Crabby Reviewer at 11:05 PM