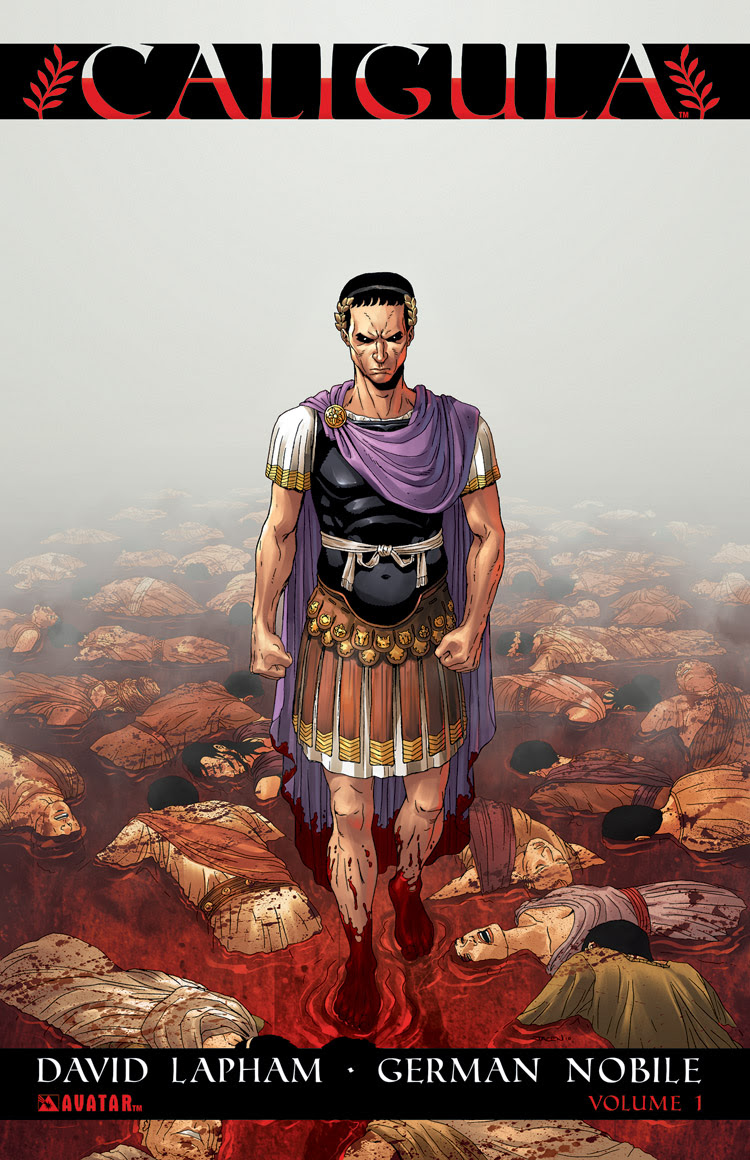 I picked up the first issue of this mini-series back when I was still collecting floppies back in 2011, and I was expecting a straight (Albeit gory and demented, given that it was published by Avatar Press) historical drama. I was surprised to find the first issue ending with a bizarre, out-of-left-field cliffhanger that saw the book taking a hard right turn from historical drama into pure Horror territory. Then, forces beyond my control finally pushed me out of my local comic shop and into the world of online trade-buying, and I was forced to "Wait for the trade" to see how Caligula's story turned out.

CALIGULA, VOLUME 1 is brought to life by the team of Writer David (Stray Bullets) Lapham and Artist German Nobile, and the two do a fine job of bringing ancient Rome to (Some semblance of) life- I say "some semblance" because I have a quibble about the artwork, but I'll get to that in due time.

The book starts off with a family of Olive Farmers being defiled and slaughtered during a home invasion perpetrated by, of all people, Rome's Emperor, Caligula. The only surviving member of the family is young Junius, who was in another town selling the family's olive oil at the time of the killings. He vows revenge on Caligula, and sets off for Rome, planning his assassination. Junius sinks deeply into the perversions of ancient Rome as he attempts to get close enough to Caligula to kill him, which he eventually does. (Get close enough to kill him, not actually kill him...) Junius strikes a killing blow, but it has no effect on the mad Emperor, other than pissing him off. Caligula is in a forgiving mood that day, and adopts Junius as his Page/Scribe/Slave/Lover, renaming him "Felix", and forcing him to participate in all manner of atrocities, as Junius waits, possibly in vain, for a chance to end Caligula's reign once and for all.

Lapham delivers some real Horror here, and manages to depict the more unsavory aspects of Caligula's reign without going too far overboard. (Yeah, it's an Avatar comic, so it still goes overboard, but not TOO FAR overboard...there are things hinted at or obliquely shown that would probably get the creators, store owners, and readers arrested had they been shown full-on, so I thank them for exercising a modicum of restraint in this series.)

The art is a whole different beast...German Nobile is a talented painter, but his figures are stiff and lifeless, and he is unable to convey movement of any kind. All of his figures look stiff and posed. He has a good eye for panel layout and composition, and his storytelling abilities are top-notch (I was never confused as far as who was speaking or what was going on in any given panel, which is not something that I can say about most current artists....), but he really needs to work on his sense of movement and fluidity. In a way, this book reminded me of those old fumetti comics, where they would have posed pictures in lieu of artwork. There was one panel towards the end of the book, where Junius throws a surprising punch at another character, and it looked like he was giving her a noogie. There was no sense of Junius' arm moving at all, no sense of any weight behind the punch, no sense of impact....I hope he improves on this for future volumes.

I won't get into too much detail about the truth behind Caligula's reign, and how he became seemingly immortal, except to say that Lapham spins a clever yarn, and he had me in the palm of his hand by the time the story concluded. Avatar recently released the second volume, and I'm excited about the story possibilities that Lapham and Nobile could explore. CALIGULA, VOLUME 1 is an interesting little curiosity, and I highly recommend it.

CALIGULA, VOLUME 1 collects all six issues of Avatar's CALIGULA mini-series, complete with all covers and variants.


Posted by The Crabby Reviewer at 9:20 PM