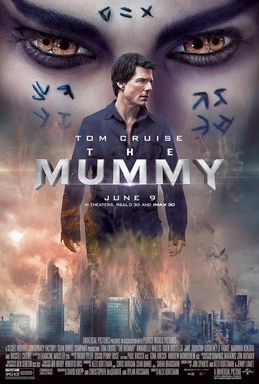 Universal kicks off (Again!) their "Dark Universe"....
On paper, this must have seemed like a no-brainer. Universal's MUMMY franchise spawned three movies starting in the late '90's that made a ton of money, and are generally fondly-remembered as fun films. Tom Cruise is a huge star. Shared cinematic universes are the new in thing. Writer/director Alex Kurtzman has been involved with a bunch of huge movie franchises. How could this fail.....?

Well....this grimdark film is nothing like the Brendan Fraser MUMMY films, Tom Cruise is generally thought of as a weirdo, Universal is pushing the shared universe before they even have anything worth sharing, and Alex Kurtzman is a talentless hack who has yet to do anything really worthwhile.

Don't get me wrong with my grimdark comment....I'm all for a good, old-fashioned pitch-black HORROR film, but this isn't it. This is (Intended to be....) an Indiana Jones-esque romp through Mummy territory, but Tom Cruise is no Harrison Ford. His Nick Morton is meant to be a charming rogue, but he comes across as more of a smug asshole than anything else.

The story, such as it is, finds Morton and his sidekick Chris Vail stumbling across the hidden tomb/prison of Egyptian Princess Ahmanet, played by Sofia Boutella, who is one of the only people in this film to bring any passion to her role. You've seen Mummy movies before....Ahmanet comes back to life, and sets off on a reign of destruction through England as she attempts to resurrect the Egyptian God Set. Russell Crowe adds a bit of fun to the proceedings as Dr. Henry Jeckyll, the head of The Prodigium Group, whose purpose is to locate and fight monsters.


The twist here is that Ahmanet has chosen Cruise to be the embodiment of Set, which could have led to interesting things in the Dark Universe franchise. The film ends with Cruise inhabited by Set, and......nothing. If they had had Morton go off with Ahmanet at the end, they could have had a good hook to hang their franchise from. Jeckyll would recruit characters from other Dark Universe films to fight Set and Ahmanet, with the storyline threading through all of the films before coming together in one big monster blowout.

Not so much. Cruise struggles with Set for half a second before gaining control, taking out Ahmanet, and going back on his merry way as an asshole treasure hunter/thief. (I've read that Cruise tried to salvage this film in the editing room, and I can almost guarantee that he chose to end the film with him as a sandstorm-controlling hero.) I can guarantee that there are some big meetings going on in the Universal boardrooms today following the film's terrible $32 million gross this past weekend. (Compare that to WONDER WOMAN's nearly $60 million dollar second weekend...)

I can't say that this was a terrible film....It looked nice, and the effects were good. It also wasn't a good film. There was not one minute where I cared about any of these characters. (It was particularly grating to see Cruise's selfish asshole character twice save Annabelle Wallis's character just because the filmmakers were trying to show us that he was, underneath it all, a really good guy. Sorry, he really wasn't.) This was more a "See it today, forget about it tomorrow" kind of film....It made absolutely zero impression on me. I have a theory about horror being harder to convey in this day and age...If everyone has a cell phone and an internet connection, you can never really be alone with the monsters and beyond help. That's why I think Universal should have set the "Dark Universe" in Victorian times.

My wife thought this film was "Eh", but she liked a few parts for their originality, until I schooled her regarding the films that those "original" parts were stolen from. The dead best-friend as Greek Chorus was cribbed from AN AMERICAN WEREWOLF IN LONDON, Ahmanet staggering through England sucking the life out of people as she searched for her soulmate was taken from Tobe Hooper's underrated LIFEFORCE, Jeckyll and Prodigium are basically Nick Fury and S.H.I.E.L.D., Morton and Jenny are Indiana Jones and Marion Ravenwood sans charisma. They even stole the Mummy's-face-in-a-sandstorm from the Fraser films. (I did get a kick out of the easter-egg that tied this film to the Fraser films, though....If they go forward with the "Dark Universe" series, they should absolutely follow up on this connection.)

If Universal is reading this, ha ha, my advice: More Crowe, less Cruise, more atmosphere, more Prodigium, more horror and less city-destruction. And lose Kurtzman. Or maybe scrap this, and start from scratch in Victorian England....

THE MUMMY wraps up a measly three out of ten ankhs:
☥☥☥

Posted by The Crabby Reviewer at 9:35 AM