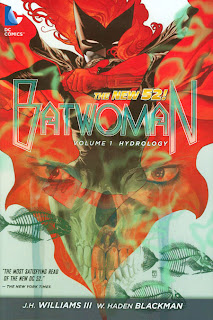 I haven't really been blown away by Batwoman up to this point. Her origin and previous appearances have been stretched all over the DC Universe, starting with 52, and finishing with a back-up strip in DETECTIVE COMICS. Personally, I found the character interesting, but her appearances have been muddled by Greg Rucka's insistence on continuing his ridiculous "Crime Bible" storyline, and his relentless desire to shoehorn in his bizarre, out-of-place shapeshifters that marred his run on DETECTIVE COMICS years ago. I purchased the BATWOMAN: ELEGY collection, and while I found the characters and storyline interesting, something about Rucka's writing just didn't gell with me. (I've always found Rucka to be hit-or-miss, and he's usually "Miss" when it comes to Bat-titles.) I was, however, keen to see how Batwoman was faring in The New 52 Universe, and with Rucka gone, I was also eager to see how J.H. Williams made out as a Writer/Artist.

The short answer is: Not too shabby.

His art, as usual, is spotless, crisp, and inventive. There's not a single panel that isn't a work of art, and he cycles through different styles at such a breathless pace that you'd almost swear that there were two or three brilliant artists collaborating under one pen-name. The overarching storyline revolves around a ghostly Woman named La Llorona, who is kidnapping children all over Gotham City. Williams and Co-Writer W. Haden Blackman mix in a slew of juicy subplots, involving DEO operatives Agent Chase and Director Bones, Batman, Batwoman's deceased (?) Sister, and her spunky Cousin, Bette, AKA Flamebird. As soon as I closed the book, I was ready to dig in to the second volume, which, happily, is already available. My one beef...? I still don't get "The New 52"....This is clearly based in pre-New 52 continuity, as they reference Batman, Inc., previous Batwoman adventures, the DEO....there's no new continuity to be had here. I just can't wrap my brain around DC's intentions as far as this massive reboot goes. If you can put that aside, however, BATWOMAN, VOLUME 1: HYDROLOGY is one hell of a good read. (Oh, one more beef.....I'm one of those "Mature Readers" that they put on the labels of comics that aren't kid friendly, and I usually don't care about sex and violence in my funnybooks, but ever since I became a Dad, I've been a bit more sensitive, and this book has a fairly graphic Lesbian sex scene, with some strongly implied oral sex. Not a big deal, but more than I would expect for a mainstream, all-ages book.)

DC Comics provided a review copy.
Posted by The Crabby Reviewer at 5:04 PM