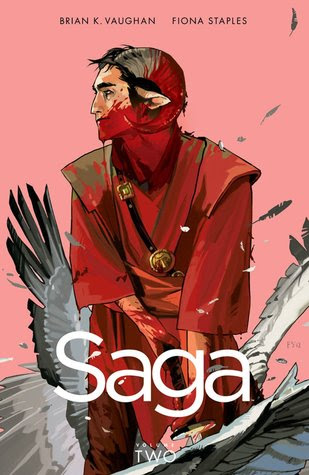 I have to say that I was a little underwhelmed by the first volume of Brian K. Vaughan & Fiona Staples' SAGA. The monthly comic was a bestselling sensation, and I was expecting greatness, and what I read was, in a nutshell, really standard stuff. I rated it a 5 out of 10. The premise was good enough to get me to come back for seconds, though, so here we are, SAGA, VOLUME TWO...and the verdict is....?

(THERE MAY BE SPOILERS, ESPECIALLY IF YOU HAVEN'T READ VOLUME ONE YET...BE WARNED!!!!!!)

Marko and Alana, fugitive lovers from opposite sides of a bizarre outer space war, are still on the run with their halfbreed baby. The trio were joined by Marko's parents at the end of volume one, and the second collection mainly deals with this new family dynamic.

I'd rate this book an 8 out of 10, but even though I liked it a lot more than the previous volume, there are still a lot of things that grate on me as I read SAGA...I've been trying to pinpoint them, and the best way I can possibly convey my issue is to say that it has a lot of stuff that takes me out of the story. I'm kind of a stickler for stories being told in a way that's appropriate to their setting, and anything that breaks that mood can jar my mind away from the vibe that the Author is trying to set up. I recently watched Quentin Tarantino's DJANGO UNCHAINED, and while I generally enjoyed the film, some of his musical choices took me right out of the film, such as the climactic shootout that was set to a rap song. I get what he was trying to do, but a rap song in a Western...? Took me out of the film immediately. There's a lot of that kind of stuff in SAGA, and I'm not sure how much of it is Author Brian K. Vaughan and how much of it is Artist Fiona Staples. First off, Staples' art really doesn't do much for me...I find her figures to be too stiff and blocky, and her backgrounds leave a lot to be desired. As for the things that jolt me out of the story......I'm reading about an intergalactic war, and planets populated by bizarre alien beings. Would those alien beings wear yoga pants and sandals? Would they use words like "Twat"...? Why does Prince Robot IV's race have TV's, complete with old-school antennas, for heads? Would an alien couple really talk about feeding their baby applesauce? Yeah, it's picky, but it bothers me. The book also suffers from the absence of The Stalk, who was surely one of the creepiest, most off-putting fictional creations ever. Ugh...I get the chills just thinking about her. Bad move killing her, Vaughan!

Also, I hardly consider myself a prude (In fact, I consider myself a pervert, but that's just me.....), but there are a lot of times where Vaughan and Staples make me say "Really...? Was that necessary...?", such as the Godzilla-sized Cyclops with a massive, diseased, dripping penis, and did Prince Robot's TV-screen face really need to show hardcore gay porn as he lies dying towards the end of the book? (I actually failed to notice the two pages of penises until I read an amazon review that pointed it out. Good job on the cock-spotting, amazon reviewer!) It almost seems like Staples is sitting there giggling, in her best Beavis voice, "Heh heh heh....I can draw schlongs! Boi-oi-oi-oi-oinnnng!!!!"

Overall, SAGA, VOLUME TWO was a great improvement over the first volume. The end was enough to make me feel sad that I don't collect floppies anymore.....it's going to nerve-wracking waiting for Volume Three.

Posted by The Crabby Reviewer at 9:03 PM