Creepy Presents Steve Ditko: The Definitive Collection of The Artist's Work From Creepy and Eerie! 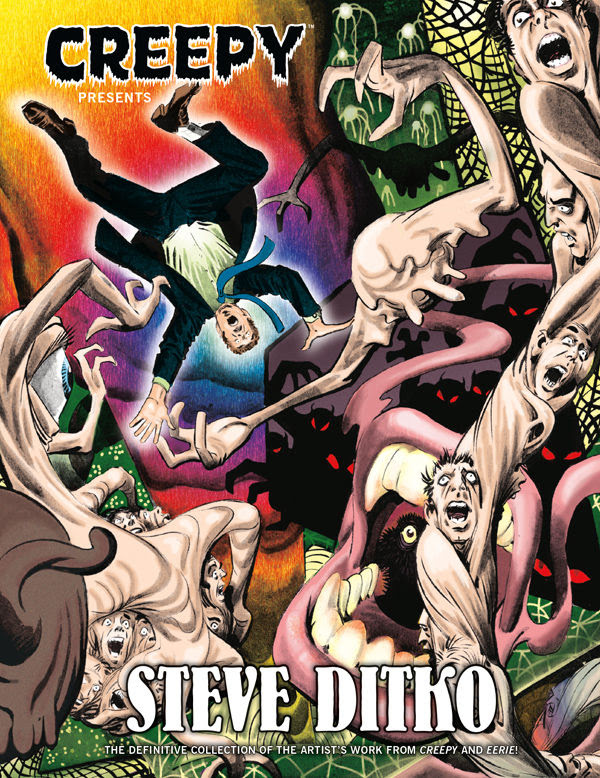 Dark Horse has been doing a great job of curating the CREEPY and EERIE brands, with their phenomenal ARCHIVES volumes, as well as floppies featuring all-new work by top creative talent, and their CREEPY PRESENTS line, showcasing individual Artists or characters.

The latest Artist to get this treatment is the legendary Steve Ditko. I became a Ditko fan when I was a little boy, thanks to Pocket Books' innovative digests, which were unheard of at the time. Comic books were NEVER collected back in the 1970's, so this was a rare treat, as well as a rare opportunity to read early Spider-Man adventures.

I was raised on Ross Andru and Gil Kane's Spidey, with a dash of John Romita thrown in for good measure. I'd seen Ditko's art before, but seeing his work on Spider-Man was amazing. I'd never seen anything like it before, and it's still a high-water mark for me. Ditko's wall-crawler just cannot be topped.

So I was thrilled to see that Dark Horse was collecting all of Ditko's work for Warren Publishing in one deluxe hardcover. There are sixteen stories contained within the pages of CREEPY PRESENTS STEVE DITKO: THE DEFINITIVE COLLECTION OF THE ARTIST'S WORK FROM CREEPY AND EERIE!, fifteen of which are written by legendary Writer/editor Archie Goodwin.

EC Comics remains the top of the mountain as far as Horror comics go, but Warren, while a distant second, was nothing to sneeze at, especially the early issues of CREEPY and EERIE, when Goodwin was at the helm. Goodwin is at the top of his game in these stories, and Ditko brought his A-game as well. The bulk of the book is taken up by Horror stories, but there are a few Sword & Sorcery stories, which would give Conan a run for his money. I'll always feel like his work on Spider-Man was his best, but the stunning black-and-white linework that he did for CREEPY and EERIE comes pretty damned close. Horror fans and Ditko fans NEED to pick this book up.


Posted by The Crabby Reviewer at 4:10 PM