The Crabby Reviewer is just a little over a year old, and it's once again time for my annual "Best of the Year" post. Thanks to the two or three of you that read regularly, and I hope you both have a happy 2014.  (If you're the mysterious, possibly non-existent third regular reader, I'm sorry that I neglected you. I'll try to count you in in 2015.)

Anyway, this is purely non-scientific. Just because I read in in 2013, that doesn't mean it was released in 2013. These are the best books that I read in 2013, and they're listed in the order that I read them in, not necessarily best to worst or worst to best.
Anyway, here we go:

THE HOUSE ON COTTAGE LANE by Ronald Malfi

One of Cemetery Dance Publications awesome little Halloween shorts. Malfi has developed into one of Horror's real "Go to" guys, and he really delivers here. Great, creepy stuff...perfect Halloween reading. (I read it last January...go figure.)


MARVEL COMICS: THE UNTOLD STORY by Sean Howe Crabby Review!
Is there anything finer to a 40+ year veteran comic-book reader than getting all of the dirt on his favorite creators? No, there isn't. Anyone with more than a passing interest in Marvel Comics will love the shit outta this book. I nearly shed a tear when I hit the last page. I wished it would go on forever.....


RESIDENT ALIEN, VOLUME 1: WELCOME TO EARTH!
A wonderfully quirky, low-key tale about a small town Doctor investigating a murder. the Doctor just happens to be an Alien who is stranded on Earth, waiting to be rescued. Great stuff. Dark Horse has Volume 2 coming soon, and I can't wait. 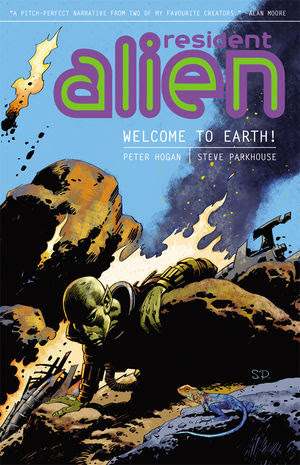 THE ROCKETEER: CARGO OF DOOM
IDW has really kept the torch burning for Dave Stevens' ROCKETEER character...This volume, in particular, was absolutely perfect. It stands alone, but has some wonderful little nods and winks to other Pulp-era characters. Great fun.

GENIUS
A brilliant, heartbreaking original graphic novel. I was really taken by surprise by this one, and my advice is to get a copy and read it knowing as little as possible. Just let it wash over you and weave it's spell....


SCALPED 4: THE GRAVEL IN YOUR GUTS and SCALPED 6: THE GNAWING 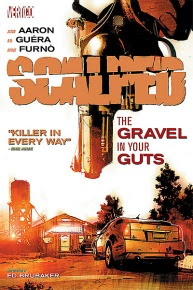 Jason Aaron's epic crime drama is always great, but these two volumes were even greater. This would make a great HBO series.

Yeah, I know...Mark Millar is an egotistical, self-promoting twat, and his stuff is nihilistic and retarded. That said, this was perfectly nihilistic and retarded, and I couldn't help but smile as these unrepentant scumbags double, triple, and quadruple-crossed each other. Funny, ugly, and shame-inducing, but I loved it.


MAXIMUM MINIMUM WAGE Crabby Review!!
A massive honkin' collection of all of Bob Fingerman's MINIMUM WAGE comics. This huge tome will provide hours of reading and hundreds of laughs.

USAGI YOJIMBO, BOOK 27: A TOWN CALLED HELL Crabby Review!!!
Stan Sakai's rabbit ronin is always dependable...This volume incorporates some Horror elements that I really enjoyed, and I hope to see Sakai go down this path more in the future. 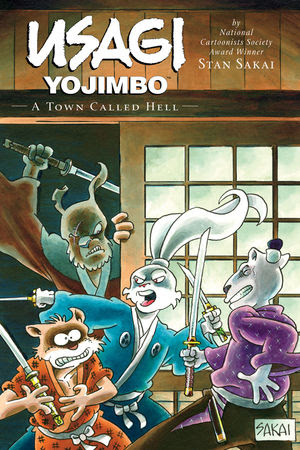 THE SIXTH GUN, BOOK 5: WINTER WOLVES Crabby Review!!!!
Cullen Bunn and Brian Hurtt's epic weird western keeps chugging along, and it gets better and better each volume. Cullen Bunn has quickly become one of my favorite writers thanks to his work on THE SIXTH GUN, and I'll be damned sad when he wraps up this story. If you're a fan of Westerns, Horror, or both, do yourself a favor and give this book a try. You won't be disappointed.


NOIR: A COLLECTION OF CRIME COMICS Crabby Review!!!!!
Noir fans will eat up this criminally good anthology of dark, nasty stories. It's worth the price of admission just for the Azzarello/Moon/Ba story "The Bad Night" which I wish I could discuss with you without spoiling the huge "A-HA!!!" moment, but...I can't. Trust me, it's worth it. Just go buy a copy. 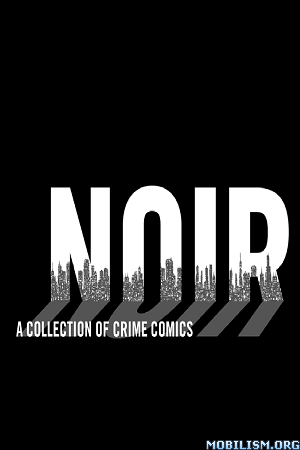 CRIMINAL, VOLUME 5: THE SINNERS
Ed Brubaker and Sean Phillips never disappoint, and this volume of their epic crime masterpiece CRIMINAL is no exception. 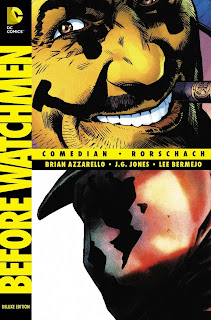 DC's BEFORE WATCHMEN was considered sacrilegious and dismissed out of hand by most comics fans, but I figured that If Alan Moore can have Mr. Hyde rape The Invisible Man to death without giving a shit what H.G. Wells and Robert Louis Stevenson may have thought about it, why should I give a shit what someone does to WATCHMEN? Love it of hate it, the original Moore/Gibbons book stands untouched...Personally, I thought BEFORE WATCHMEN was a noble experiment, with more hits than misses. Cash grab? Hell yeah. But some of the creators really tried, and a few hit a home run. This book was a home run. 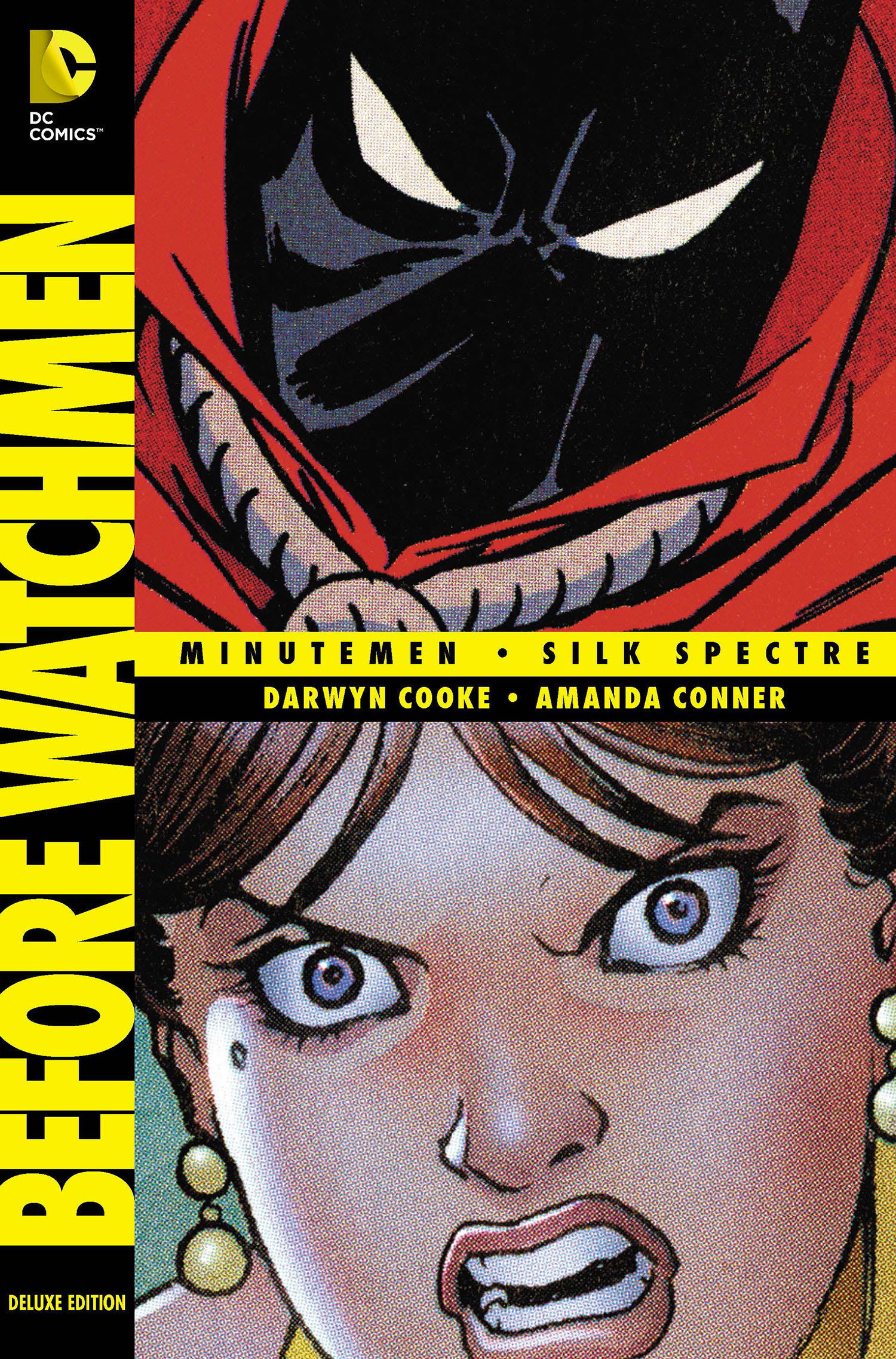 Another home run, mainly because of Darwyn Cooke's brilliant MINUTEMEN story. The Silk Spectre wasn't in the same league, but it featured beautiful Amanda Conner art, which elevated it immensely.

WONDER WOMAN, VOLUME 2: GUTS and WONDER WOMAN, VOLUME 3: IRON Crabby Review!!!!!
Brian Azzarello's re-invention of Wonder Woman has been one of the few bright spots in DC's otherwise bland and forgettable "New 52". Violent and horrific, infused with all of the Greek mythology that you can handle, this is (Finally!) a Wonder Woman that I can get behind.

THE BONES OF YOU, by Gary McMahon Horror World review!!!!
An understated, creepy Horror novella about a man who moves in next door to the site of a series of infamous child murders. (You know that can never end well.) McMahon serves up a slow-burning tale, with finely drawn, realistic characters. This is Earthling Publications 2013 entry in their Halloween series.

BATMAN INCORPORATED, VOLUME 1: DEMON STAR Crabby Review!!!!
While I found Volume 2 to be better (Indeed, I thought it was the best Batman story ever published....), this volume scored higher, because Volume 2 ended with a huge, long mess of a story that wasn't written by Grant Morrison, and that dragged down the score. Yeah, I know...I'm nuts. Read Morrison's whole BATMAN run, and wear a steel hat, because your mind WILL be blown right through the top of your head.

HOT IN DECEMBER, by Joe R. Lansdale Crabby Review!!!!
Lansdale strikes again, in this novella of revenge and retribution in East Texas.

Couldn't you just feel me running out of gas towards the end there? If you've read this far, I thank you, and I hope you enjoyed this year's "Best Of", especially since I spent three hours writing it! Anyway, that's not a bad crop of "Perfect 10's" for one year...here's hoping for even more in 2014.
Happy New Year, Crabs!

Posted by The Crabby Reviewer at 6:49 PM