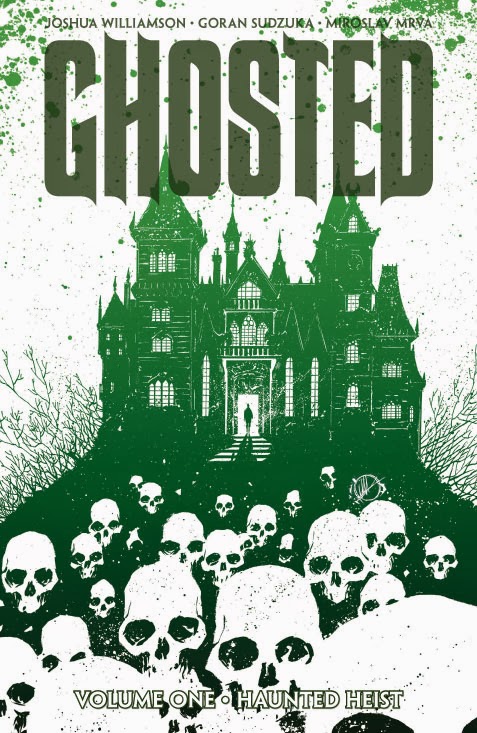 Any book that describes itself as a cross between OCEANS 11 and THE SHINING has my attention.

Unfortunately, the book didn't quite live up to the blurb, or it's fascinating premise.

GHOSTED, VOLUME ONE: HAUNTED HEIST has a great concept to build on: Imprisoned thief Jackson T. Winters is broken out of jail by the rich, reclusive Markus Schrecken, collector of occult paraphernalia, and presented with an offer he can't refuse: Break into The Trask House, the soon-to-be-demolished site of numerous murders and atrocities, and steal a ghost for Schrecken's collection. Upon completion, Winters will be rich beyond belief, and safe from the authorities on Schrecken's private island.

Winters assembles a crack team of ghost-hunters, skeptics, mediums, and thieves, and sets off to retrieve Schrecken's spook. Things don't go as well as he hoped they would.

Writer Joshua Williamson has a great premise, and his twisty narrative is filled with betrayals and double-crosses, but his characters are actually caricatures, and each one of them stays firmly within the parameters of their adjective: The Thief can't stop stealing, even when he sees the terrible consequences. The skeptic remains skeptical, even as all kinds of supernatural hell that he can't explain breaks loose around him. There are a few moments that seem calculated to be big reveals, such as the truth behind the heist that ended with Winters behind bars, that just fall flat, either due to their timing or the lifeless, tough-guy dialogue. Phenomenal premise, poor execution.

The book is somewhat redeemed by Goran Sudzuka's exceptional artwork, which rises head-and-shoulders above Williamson's tepid script. Sudzuka's art is reminiscent or Darick Robertson and Steve Dillon at their best. His characters have a life and sense of movement that is often missing in modern comics, and his ghosts are distinctive and memorable.

GHOSTED, VOLUME ONE: HAUNTED HEIST collects the first five issues of the Image Comics series (I cannot possibly imagine where this series could go after the end of this collection, though...), including covers, which are provided by Sean Phillips. It's an entertaining book, and I'm glad that I read it, but there really wasn't enough here to make me want to come back for volume two.

Posted by The Crabby Reviewer at 9:33 AM