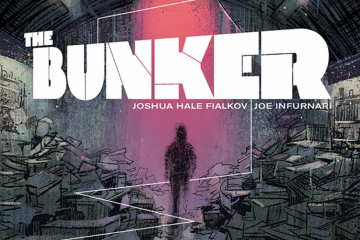 The old "Travel back in time to stop the bad guy" story with an interesting spin....

A group of friends, while attempting to bury a time capsule, find a bunker deep in the woods. Upon investigation, the bunker is filled with letters and boxes upon boxes of documents.....left there by their future selves. The letters warn of a dire future that will soon come to pass...a future where humanity is virtually wiped clean by a plague that they will be responsible for. Can the group stop this future from coming to pass....? And do their future selves really want them to....?

I generally have a rule of thumb about how far I'll go into a book before quitting it if it isn't catching my attention. THE BUNKER, VOLUME 1 collects the first four issues of the Oni Press series, and I was waaaaay over my limit (Almost a full two issues in, in this case...) before the story started to engage me at all. I was sorely tempted to cut and run, but something told me to stick around, and I'm glad that I did. Writer Joshua Hale Fialkov's story has a lot of potential, and he presents some sticky moral and ethical quandaries to his cast, and his readers as well. The art, by Joe Infurnari, is an acquired taste....I had a serious dislike for it, at first, but by the end I had either accepted it, or just gotten used to it. It is what it is....not necessarily to my liking, but he gets the job done.

By the end, I was cautiously optimistic about giving THE BUNKER, VOLUME 1 a favorable review. It really kicks into high gear in the last half of the book, and if Fialkov and Infurnari can keep up that level of suspense and energy in the future, I'll be glad that I stuck around. Don't let me down, fellas!

Posted by The Crabby Reviewer at 8:05 AM