The Nightmare Girl, by Jonathan Janz 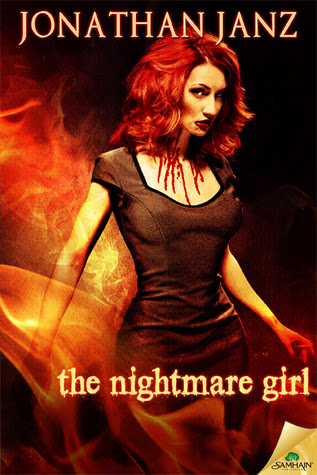 When I was a kid, one of my favorite movies that I should probably not have been allowed to watch was RACE WITH THE DEVIL. This nightmarish film followed a pair of couples vacationing in an RV who picked the wrong place to spend the night. They're parked in a big, open field, having a grand old time hanging out and shooting the breeze, when they see a bonfire being lit across the field. They laugh it off, at first, assuming the robed figures they see cavorting around are harmless hippies, but they stop laughing when they see a human sacrifice being performed. They end up being noticed by the "hippies", who are actually a Satanic cult, and the rest of the film is a relentless chase across the backroads of America, with the cult pursuing the RV everywhere, and seemingly every innocent bystander that they approach for help is really a cult member out for their blood. This film made a HUGE impression on my fragile young mind, and I often wonder why, aside from a phenomenal Jack Ketchum short story whose name I can never recall, there isn't more Horror fiction about Satanic Cults. Well, here comes Jonathan Janz to the rescue!
THE NIGHTMARE GIRL starts off with a bang, as contractor Joe Crawford and his wife witness a young girl, accompanied by her mother, abusing a toddler at a gas station. Joe intervenes, and soon comes to wish that he hadn't. After a violent altercation with Angie Waltz and her mother, Sharon, events spin out of control: Angie has her son taken away from her, and soon takes her life, violently self-immolating herself in front of Joe. Joe, feeling needless guilt over his part in the event, attends Angie's funeral, watching the service from afar. But this is no ordinary funeral service....Angie and her mother were part of a Satanic Cult, and the mourners aren't going to be content with getting a buzz on while they reminisce about Angie. They're out for blood, and soon Joe and his family will find their lives turned upside-down in a nightmare of brutality and violence.

Author Jonathan Janz excels at charicterization, and THE NIGHTMARE GIRL is at its best while the mystery of the Cult is unfolding. Janz crafts an atmosphere of dread and paranoia, building to a bloody crescendo, and that's where the book kind of falls apart. The end is an orgy of blood and guts that reminded me more of the "Crazy '88's" fight scene from KILL BILL, VOLUME ONE than the conclusion of a Horror novel. I didn't dislike the end enough that it ruined the rest of the novel, but it was a pretty abrupt change of pace, going from paranoid Horror to brutal revenge fantasy in the span of a few pages. I also felt that the climactic bloodbath went on far too long, losing impact as it went on, ultimately becoming the literary equivalent of a violent video game.

However, since the Satanic Cult sub-genre is so rarely added to, I will give Jonathan Janz's THE NIGHTMARE GIRL a slightly qualified recommendation.

The author provided a review copy.

Posted by The Crabby Reviewer at 12:56 PM