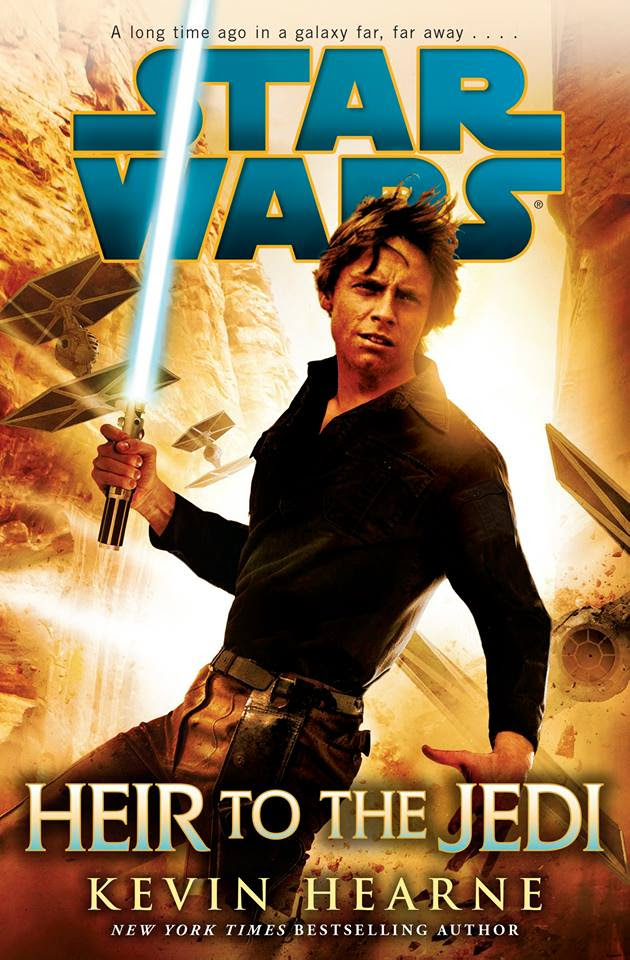 One of the faithful "Crabby Readers", my buddy John Ernst, has repeatedly requested, both in person and in the comments section, that I review Kevin Hearne's new novel STAR WARS: HEIR TO THE JEDI. I'm open to requests, and I already had a review copy, so why not?
Just to make things clear to anyone else who has a request: John is a close relative, and I've known him since he was a baby, so his pick got a lot more leeway than I would have given anyone else. This was not a good book, and I was ready to stop about two chapters in, but I felt like I had to give the book a fair shake, if only because John seemed so enthusiastic about it. It wasn't easy, but I made it.

A lot of hoopla surrounds this book, since it's one of the first few official "canon" novels that have been ok'd by Disney/Lucasfilms since they declared the entire decades-old expanded universe to be made-up garbage that meant absolutely nothing. All that was official were the films! And now these books that you must have in order to get the lowdown on what really happened.

The gimmick of this book, according to the introduction by author Kevin Hearne, is one that I have, honestly, never even spent one second thinking about: How did Luke Skywalker learn how to use The Force well enough to attract his lightsaber to his hand in the Wampa's cave in THE EMPIRE STRIKES BACK? (Am I alone in never wondering about this at all? I think I just assumed Ben Kenobi's ghost had been training him in between movies.) Well, this book is ostensibly about how Luke learned to use The Force in those post-Kenobi/pre-Yoda days. Ostensibly.

The story is told first-person by Luke Skywalker himself, something I don't ever remember encountering before in a STAR WARS story. The first problem with the book is that Hearne fails miserably in capturing Luke's voice. There was not one sentence on one page that rang true to me as something that would be uttered by Luke Skywalker, or in the voice of Mark Hamill.

The second problem is the plot, or lack of one. While supposedly about how Luke honed his ability to use The Force, it's actually an episodic series of loosely connected adventures that feels more like a video-game plot than a novel. Luke is sent on a mission to establish a new smuggling route that could benefit the rebellion financially. Luke partners up with a beautiful rich girl to try to find a new base for the rebellion. Luke and beautiful rich girl attempt to kidnap a mathematical genius hacker from the clutches of The Empire. This is a thin frame to hang a novel upon, and Hearne's characterization of Luke as a space valley-boy doesn't help matters any.

Full disclosure: I have been over STAR WARS for a long time now. The dreadful prequel pictures killed the franchise for me, and I pretty much lost all interest. Prequels in general don't do much for me, nor do "In-betweenquels" that tell you what happened in between other books/films/comics. My feeling is that if I'm already at point C, I really don't give a shit what happened at point A or point B. I don't need to know what happened to Peter Parker's parents or see Godzilla being bullied as a kid, or watch baby Darth Vader win pod races.....I already know where the characters end up, I don't need to see every step they took on the way there.

Luke's discovery of The Force is mentioned a grand total of three times, as he attempts to move noodles that he is eating without touching them. Thrilling. Hearne also does something that always takes me right out of a STAR WARS story: He drops words and phrases that don't fit the SW fantasy universe: Ice cream, buckwheat noodles, "Nerf nuggets"...there's even a parody song that gets the mother of Luke's new love interest jailed: "Darth Vader's Many Prosthetic Parts". Really, I'm not making this up.

All in all, this is a pretty boring book....it's not aggressively bad, but it's not even remotely interesting. If this is what the new expanded universe is going to be like...stop the stars, I want to get off.

Posted by The Crabby Reviewer at 6:49 PM