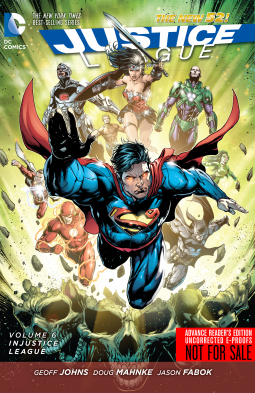 Geoff Johns keeps up his usual breathless pace in JUSTICE LEAGUE, VOLUME 6: INJUSTICE LEAGUE.......
I mentioned in my review of BATMAN AND ROBIN VOLUME 6: THE HUNT FOR ROBIN that Lex Luthor "seems to have joined The Justice League when I wasn't looking." Seems I should have looked here first. It's been about one full year since the last JUSTICE LEAGUE collection (This is a HUGE book, collecting issue #'s 30-39...), and that was a full-fledged tie-in to FOREVER EVIL, which I absolutely hated, so you'll have to forgive me for not remembering that Luthor was positioning himself as a hero at the end of that crossover.

After saving Earth from the invading Crime Syndicate, Lex Luthor pushes hard for Justice League membership, which he is granted. It sounds totally ridiculous, but writer Geoff Johns makes it, if not exactly believable, than at least a little bit easier to swallow. Suspension of disbelief is pushed to the breaking point, but I was able to go with it, and by the end, Johns even had cynical, jaded me wondering if maybe Lex had turned over a new leaf, of at least picked up the corner of a new leaf and took a quick peek underneath it.

One huge plot device that I can't wait to see play out is Luthor's discovery of Batman's secret identity. It's a lot of fun to see Bruce Wayne and Lex Luthor, two sides of the billionaire philanthropist coin, match wits. These kinds of identity-reveal stories never end well, and they're ALWAYS sloppily retconned out of existence (I'm looking at YOU, Spider-man!), which sucks, but this particular conundrum should be fun while it lasts.

Aside from Luthor as fox-in-the-henhouse, there's not much here, storywise. Johns re-re-re-re-RE-introduces The Doom Patrol (Have they not been in a "New 52" book yet...?), and unleashes Luthor's "Amazo Virus" on an unsuspecting populace, but that's pretty much it. (The way that everybody just kind of shrugs off how Luthor had this incredibly deadly virus on hand with a "Eh, it wasn't his fault it got OUT." boggles the mind. If Donald Trump cooked up a virus that killed my family, I wouldn't give a shit HOW they contracted it, I'd be pissed at HIM.)

I also had to roll my eyes as Geoff Johns introduced what is basically ANOTHER Green Lantern into the DC Universe. This time, it's a civilian who is taken as a host by the ring of The Crime Syndicate's Power Ring. He already introduced Red, Orange, Yellow, Blue, Indigo, Violet, Black, and White ring-bearers/corps, and a Muslim Green Lantern....sure, give us ANOTHER FREAKING PERSON WITH THE SAME.....DAMNED....POWER. It's over, Geoff! I'm calling for a moratorium on new ring-based characters. Someone stop the madness!!!!!

Overall, not a bad book, but it feels like Johns is spinning his wheels until the DC stars align for the inevitable "Darkseid War". A DC crossover...? What a novel concept!

In addition to the ten issues collected in this volume, there's an extensive gallery of all covers and variants, and a small sketch gallery.


Posted by The Crabby Reviewer at 2:30 PM