Batman and Robin, Volume 6: The Hunt For Robin 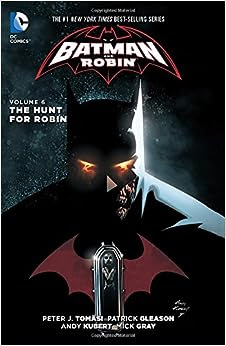 This time, it's one of my all-time favorite characters being brought back to life (Or maybe not....), so I won't complain about how death is meaningless in comics these days.

I've been totally hit-or-miss with Peter J. Tomasi's BATMAN AND ROBIN series. Of the six collected editions, I've now read four, one of which I hated, one I liked, and two that I liked a lot. BATMAN AND ROBIN, VOLUME 6: THE HUNT FOR ROBIN falls into the "I liked it a lot" category.

Maybe it's because this volume, which collects BATMAN AND ROBIN #'s 29-34 and ROBIN RISES: OMEGA is virtually all action, and therefore doesn't have a lot of time to devote to Tomasi's portrayal of Batman, who has been, to me, at least, kind of a prickish, holier-than-thou lunatic in this particular series. (There's still prickish behavior here, no doubt, just not as much of it. Witness Bruce Wayne destroying Damian's headstone with a shovel to get a good example of Tomasi's emotionally stunted characterization.)

The entire book brought to mind old issues of MARVEL TEAM-UP, especially the longer arcs that would find Spider-Man on a quest, with other heroes dropping in and out as needed each issue. Here, Batman frantically follows the trail of Ra's Al Ghul, who has stolen the bodies of Damian Wayne and Talia Al Ghul, around the world, aided on an issue-by-issue basis by Wonder Woman, Frankenstein, Aquaman, and Lex Luthor, who seems to have joined The Justice League when I wasn't looking.

The breathless chase abruptly turns on a dime when Ra's takes a powder, and is replaced in the big bad position by Glorious Godfrey and the forces of Apokalips. Setting batman against Darkseid may seem nuts, but I love it when these books leave their little boxes, and it's refreshing to see Batman go up against someone who is not a part of his rogue's gallery. The book ends on a cliffhanger, so don't expect any closure this time out, but, for the first time in a long time, I closed a DC comic thinking "I'll buy the next volume.", which is a huge step in the right direction. Good show, Mr. Tomasi!