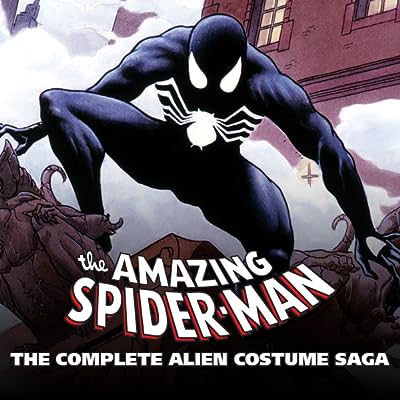 Back when painted covers were the (VERY RARE...) exception, I cannot stress what a huge impact the (Pictured above) Charles Vess cover image for WEB OF SPIDER-MAN #1 had on fans of my generation. It hammered home that WEB #1 was an important, not-to-be-missed issue. New #1's, especially those starring a major character like Spider-Man, were a big thing. In the pre-reboot/relaunch 1980's, the black costume was as big as it got.


So, thank you to Marvel for reprinting the entire saga in a pair of chunky trade-paperbacks, allowing nostalgic oldies like myself to relive the issues they owned as kids, and experience for the first time the issues they missed.

THE AMAZING SPIDER-MAN: THE COMPLETE ALIEN COSTUME SAGA, BOOK 2 picks up after Spidey has ditched his symbiotic threads, and once again finds himself in the familiar red-and-blue suit. This is, arguably, a collection that could have been skipped entirely, because, aside from a handful of one-page interludes showing the imprisonment of the symbiote at The Baxter Building, the book is almost devoid of any alien costume action. I will give Marvel props for collecting ALL of the issues between THE AMAZING SPIDER-MAN #252 and WEB OF SPIDER-MAN #1, even if some of them really don't deserve to see the light of day again after three decades.

This volume collects MARVEL TEAM-UP #'s 146-150, PETER PARKER, THE SPECTACULAR SPIDER-MAN #'s 96-100 and ANNUAL #4, THE AMAZING SPIDER-MAN #'s 259-263, and WEB OF SPIDER-MAN #1, along with a few pages from FANTASTIC FOUR #274, and a handful of covers from MARVEL TALES. There's also a MARVEL AGE article about WEB OF SPIDER-MAN #1, and some pencil art from that issue. Marvel gets so complete with these collections that they even include the brief editorials from MARVEL TEAM-UP #'s 149 and 150 that explain the cancellation of the book. As always, Marvel  goes balls-out on their collected editions, and my hat goes off to them.

This volume is missing the propulsive narrative thread of the first one, because the alien costume has already been dealt with when it opens. So what you have is a fairly standard sampling of mid-'80's Spidey books. MARVEL TEAM-UP was a trainwreck, although it picks up with the last two issues, when Louise Simonson took the reins. PETER PARKER, THE SPECTACULAR SPIDER-MAN is a book that I'll always have a soft spot for...I loved it growing up, and the issues here hold up very well. Your mileage may vary...writer/artist Al Milgrom is, in my opinion, one of the most unfairly maligned artists ever, routinely taking a beating all over the internet. I thought his stories were uniformly entertaining, and his art, which varied greatly depending on who was inking him, was unique and different, with some dynamic figurework and dramatic panels. Tom DeFalco and Ron Frenz were finding their groove on THE AMAZING SPIDER-MAN at this time, and the issues contained here all hold up extremely well. WEB OF SPIDER-MAN was never really a good book, but the first issue served as a nice, albeit temporary, conclusion to the sage of the alien costume. Collectors need to be aware that this volume and the GHOSTS OF THE PAST Epic collection share seven issues in common....those just looking for the AMAZING content, as well as WEB #1, would be better served skipping this collection and going for the Epic. (Which is next, and last, in my Spidey marathon....)