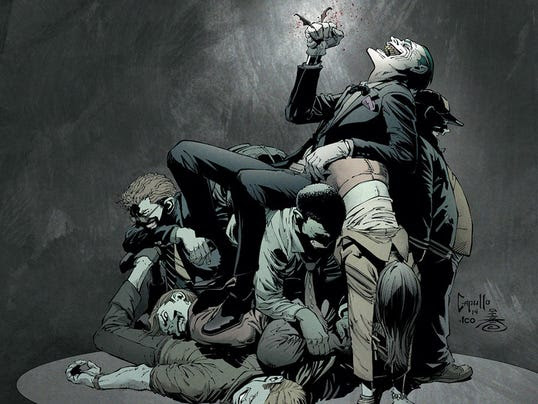 A double-dip, but actually a better deal than the first-dip.

OK, so, having just read BATMAN, VOLUME 7: ENDGAME and THE JOKER: ENDGAME back-to-back, I can honestly say that, unless you're one of those people who just HAS to keep their collection intact and their bookshelf uniform, you can totally skip the BATMAN volume and pick this up instead. This collection costs about five dollars more, and it has about twice the content, including the full contents of the BATMAN book.

This beefy tome collects the entire ENDGAME story,: BATMAN #'s 35-40 and ANNUAL #3, ARKHAM MANOR: ENDGAME #1, BATGIRL: ENDGAME #1, DETECTIVE COMICS: ENDGAME #1, and GOTHAM ACADEMY: ENDGAME #1. If you've already read the BATMAN collection, this is where you'll find the omitted back-up stories by James Tynion IV and a stellar collection of artists, including Sam Kieth, Kelly Jones, John McCrea, and Dustin Nguyen. The back-up stories aren't necessary to understand the main story, but they're very well-done, and they flesh out Snyder's vague concept of The Joker as an immortal force of nature. The Annual tells a decent, if forgettable, story about a reporter who "befriends" The Joker, and the four one-shots tell stories of a Jokerized Gotham, with varying degrees of success. None of them are bad, but I especially enjoyed the GOTHAM ACADEMY and BATGIRL stories. BATGIRL: ENDGAME gets singled out for the beautiful art, by Bengal. It's a nearly silent issue, and his art carries the story beautifully.

On a side note, it's pretty damned sad to see how potential readers have been having to jump through hoops to find out just what was collected in this volume, since DC, once again, botched the solicitations and online content listings. Honestly, it shouldn't be this hard, DC. You've put together a decent collection...label the damned thing right, and people will buy it.


Posted by The Crabby Reviewer at 8:49 AM