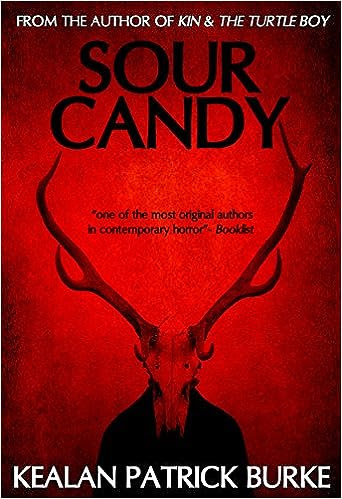 I've been beating the drum for Kealan Patrick Burke ever since Necessary Evil Press published his novella, THE TURTLE BOY over a decade ago. The man has style and talent out the wazoo, and his prose can cut you right down to your soul. He's tagged as a Horror author, but he's one of those rare talents that you just hate to see pigeonholed, since he's so damned good at anything he puts to paper. There are a lot of authors that I enjoy, but few that can actually affect me emotionally on a consistent basis...Kealan has written stuff that has creeped me out, stuff that has mad me think, and stuff that has devastated me. When people ask me "Who's your favorite author?", they usually get a list, but Kealan's name is, invariably, close to the top of that list. He's someone that you need to discover, if you haven't already.


A new Kealan Patrick Burke story is always cause to celebrate, and his latest, SOUR CANDY, is especially impressive. It landed in my inbox a few days ago, an I devoured it like a nasty ol' bag of Sour Patch Kids.

Phil Pendleton, while making a chocolate run for his girlfriend, comes across a screaming child and his haggard mother in the candy aisle. The pair attract the attention of Phil and his fellow shoppers with their bizarre behavior, and while the mother is being asked to leave the store by the manager, the child offers Phil one of the sour candies that started his screaming fit in the first place. Phil accepts it, hoping to avoid a scene, and goes on his way.

While driving home, Phil is rear-ended by the woman from the store, wrecking both of their cars. She emerges from her car, mutters to Phil "Yours now.", and promptly walks into traffic to commits suicide by taxi. Phil informs the bystanders that she had a child with her in the store, and they check the car...but find nothing. Won't Phil be surprised when he finds that screaming child from the store, Adam, waiting for him when he gets home....?

SOUR CANDY is a stellar addition to the underrepresented "Evil child" sub-genre, and Adam is one of the nastiest, most original Evil Children I've ever come across. Burke packs a lot into this novella, and, while I enjoy a vague threat as much as the next guy, we actually get to find out just who Adam is, and what he wants with Phil. Chilling stuff, made even more effective by how finely-drawn a character Phil is. Burke puts us in Phil's head as he goes through the same questions and doubts that any of us would have in a situation like this, and he smartly shoots down any of the Horror-movie-logic loopholes that a jaded fan like me could think of. This is beautifully-written, exquisitely creepy stuff.....Highly recommended.


Posted by The Crabby Reviewer at 1:39 PM