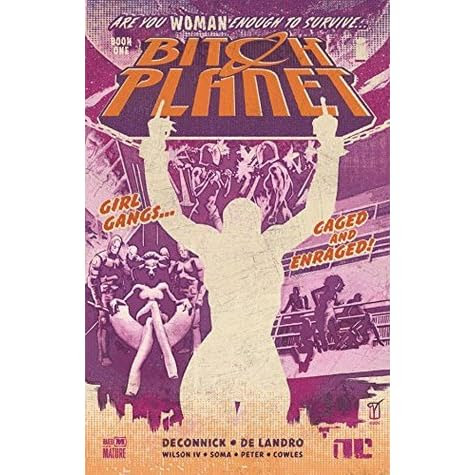 Once in a while, an acclaimed bit of entertainment comes along that "Age-checks" me; In other words, it makes me realize that I am closer to a half-century on this planet with each passing day, and I (seemingly) have seen it all, and that a younger person's "Fresh, bold, and innovative" book is my "Stale, old, and ripped-off" book.

Kelly Sue Deconnick's BITCH PLANET, BOOK ONE: EXTRAORDINARY MACHINE is just such a book. It's been getting raves for it's satire and Pro-Woman rah rah rah storyline, but all I could think while reading it is that Deconnick must assume that no one under age forty has ever seen THE LONGEST YARD or ROLLERBALL before.

Don't get me wrong...I enjoyed this book, probably way more than I should have, considering the fact that the characters, aside from the standout, Penny Rolle, are all paper-thin and barely worth remembering. Deconnick seems to have figured out our primal urge to see brutal sporting events and our innate desire to see "The Man" get fucked over by the underdog, and paid close attention to the two films that I mentioned, because this book is a near-exact copy/melding of them both. That that they're two of my favorite childhood films didn't hurt BITCH PLANET''s chances much, either.

The story, such as it is, revolves around a near-future patriarchal government that punishes "Non-compliant", or NC, women by sending them to the titular prison planet. On Earth, the government makes the not-so-shocking discovery that the unwashed masses get off on seeing people die, and decide to spice up their population-pacifying sporting events with a little bloodshed, and force some of the female prisoners to start a team, intending to offer them up as sacrificial lambs in the televised events, assuming the male teams will make short work of them. The prisoners, of course, have other ideas, and recruit the biggest and the baddest for their team. The sport is pure ROLLERBALL, and all of the prison "Getting the team together" scenes are taken whole cloth from THE LONGEST YARD, right up to, and including, this volume's concluding scene of the prisoners playing the guards. This is probably as close to pure plagiarism as you're likely to find on the shelves these days. I'm amazed that there hasn't been a lawsuit of some kind yet.

That said, I did find myself being swept along by the underdog story, and I'll probably be on board for future volumes, provided that Deconnick actually has an endgame in place, and the book doesn't overstay it's welcome.

BITCH PLANET, BOOK ONE: EXTRAORDINARY MACHINE collects issues 1-5 of BITCH PLANET, complete with covers and a "Discussion Guide" that I couldn't tell whether it was meant to be satirical or not. If not, it was pretty damned full of itself.