To Infinity...AND BEYOND!!!, Part Five: The Infinity Watch, Volume 1 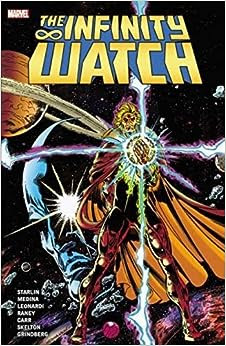 In which we wrap up (for now...) our infinitely crabby marathon.

THE INFINITY WATCH, VOLUME 1 is kind of a piecemeal volume, and it collects a lot of issues that I've already dealt with in the first four parts of this marathon, so I'll try not to tread on the same ground again...instead, I'll refer you to THE INFINITY GAUNTLET AFTERMATH, THE INFINITY WAR, and THE INFINITY WAR AFTERMATH. Those three volumes contain, among many other things, the first seventeen issues of WARLOCK AND THE INFINITY WATCH. Did I feel slightly stupid buying this collection when I already owned the bulk of it in other trades...? Eh, not really. This volume has issues 18-22, and I got it for half-price, so I can't complain too much. The only other way to get those issues would have been back issues (Yuck.) or digital (Double yuck.), so this was the only game in town.

As I said, I don't want to rehash issues that I've already covered, so I'll look at this as someone who hadn't read the aforementioned collections might. Read through as a whole, these first 22 issues of WARLOCK AND THE INFINITY WATCH are a fucking mess.

Don't get me wrong, I enjoyed this collection a lot, thanks to Jim Starlin's story and Angel Medina's (occasional...) art, but if you thought crossovers were bad these days....Sheesh. Out of these twenty-two issues, nine of them are directly involved in crossovers, and most of the rest either lead up to or follow up on those crossovers. If you're reading for a linear story, you won't find it here. Making matters worse, this collection not only doesn't include THE INFINITY WAR or THE INFINITY CRUSADE, but it also crosses over into THE WARLOCK CHRONICLES, which is also uncollected in these pages..If you're familiar with what happens in those books, you'll do pretty well here. If not, the helpful Marvel collected editions staff has included a few story recaps to get you up to speed on the crossovers, which is very much appreciated. (DC could learn a thing or two in that department.) The book can also be read, and enjoyed, as a large collection of character pieces...Starlin does wonderful things with Warlock, Gamora, Pip, Drax, and Moondragon in this collection, and he probably does more with The Mole Man in his few appearances in this series than anyone else could ever be bothered to.

This is a fun read for those well-versed in Marvel's cosmic lore, as well as for Jim Starlin fans. The art ranges from excellent to atrocious, and your mileage will most certainly vary, but I had a good time reading these stories, and I'm looking forward to Volume 2, which was released today. Your resident crab will be taking an extended break from "To Infinity...AND BEYOND!!!" for the near future, but there are more INFINITY-branded books in my endless stacks, so stay tuned.....more will be coming. Eventually.....


Posted by The Crabby Reviewer at 2:53 PM