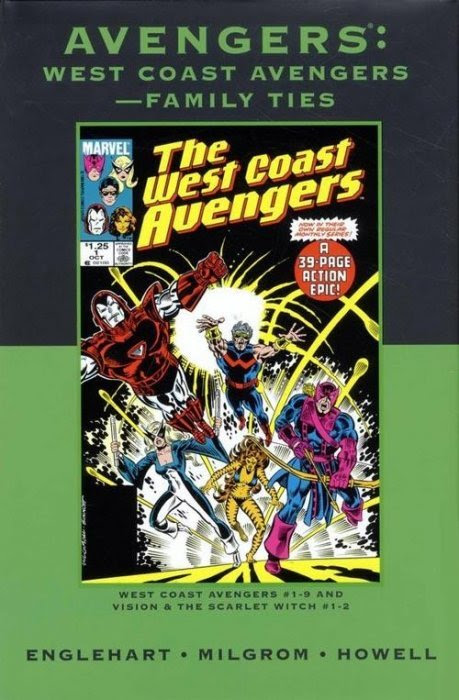 This is where the AVENGERS marathon starts to go off the rails.....

As I stated previously, I remember buying the WEST COAST AVENGERS series for maybe the first year, and then realizing that it wasn't my job to keep buying and reading this book that I just did not enjoy. So, I walked away. (In fact, I pretty much walked away from comics entirely, but that's a story for another day.) I picked this up mainly because of my mania for the late, lamented MARVEL PREMIERE CLASSIC line in general, and the direct-market variant covers in particular. I thought "Eh, it's probably not as bad as I remember it being."

Well, IS IT as bad as I remember it being?

Bad...? No, not really. Overly wordy, unfocused, meandering, strange...? Yes. Yes to all of those.

MARVEL PREMIERE CLASSIC, VOL. 64: AVENGERS: WEST COAST AVENGERS- FAMILY TIES contains a MARVEL AGE interview with Steve Englehart that basically confirms all of my suspicions about how he wrote this book: When asked about the prospect of a crossover between THE AVENGERS and THE WEST COAST AVENGERS, Englehart says "..I think Roger (Stern) knows what he's going to do for the next year- and as you may have gathered, I sort of go from month to month." And that's this book in a nutshell.....someone just making it up as he goes, which makes for a really jumbled, sloppy reading experience.

The collections opens with a four-part crossover between THE WEST COAST AVENGERS and VISION AND THE SCARLET WITCH, which ran through the first two issues of each series. Wow, what a clusterfuck this story is. The basic plot, which attempts to finally put to bed the twisted sibling relationship between The Vision, Wonder Man, and The Grim Reaper, has promise, but Englehart muddies the waters by adding in Ultron, Giant Man, Man-Ape, Nekra, Zombies, and The Black Talon, a grown man who dresses like a chicken. 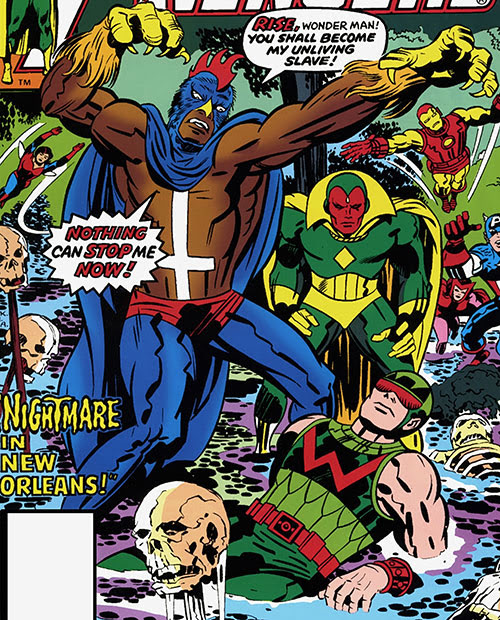 Nothing could make this guy cool.

The main takeaway that I got from this crossover is how politically correct we are these days. Today, you would never see a guy like The Grim Reaper call The Man-Ape "You Black Savage!, and follow that up with "Oh, do I hate spades!" Wow! My jaw hit the floor!

(Meanwhile, nearly every human that works for him is black, including his girlfriend, Nekra, who he may have thought was white, since she is an albino. Really, this guy is the poorest excuse for a racist ever.)

This story leads right into the VISION AND THE SCARLET WITCH collection that I'll review next, by the way.....pray for me.

Issue #3 starts off the convoluted plotlines that will weave in and out of the rest of this collection, which goes through THE WEST COAST AVENGERS #9:

Tigra's cat-inspired sluttiness (She has sex with Wonder Man and a cat-guy, and maybe Hank Pym, too. Eeew.) leads her to seek out the cat-people in hopes of purging her feline desires. (Who remembered comics were this dirty when I was a kid...?

Hawkeye wants The Thing to be the sixth member of the team, ignoring the needy Firebird.

Master Pandemonium is introduced, seeking "The Five". He is accompanied by a huge, cigar-smoking bird with long legs who speaks like retarded Yoda (!!!).

The team seeks out, beats the shit out of, and then totally forgets about Jack Russell, A.K.A. Werewolf By Night, for no reason whatsoever. Poor guy was just minding his own business.

Ultron wants to have father/son bonding with Hank Pym.

The Rangers appear, possessed by demons (!!!) to fight the team, and then completely disappear, not to be seen again. At least in this collection.

The Tigra subplot is especially painful, as it leads to an endlessly long recap which encompasses pretty much every appearance of Greer Nelson/Tigra and the cat-people EVER, which just goes on and on and on.....I hated Englehart's 1970's work for these exact same excesses. The meandering, stream-of-consciousness storylines that grew and grew into wannabe epics, bloating up to include obscure characters and increasingly bizarre plotlines. This book was just too slow and too weird for me.

That said, the bulk of the book is illustrated by Al Milgrom and Joe Sinnott, a team whose work I adored as a kid, and still get warm feelings from. (The VISION AND SCARLET WITCH issues are illustrated by Richard Howell and Andy Mushynsky, a team that shares the thick-lined, clean style of Milgrom & Sinnott.) Great old-school art, which I feel holds up very well.

The collection is kind of light on extras- Just a one-page strip promoting the VISION AND THE SCARLET WITCH mini-series from MARVEL AGE ANNUAL #1, and the aforementioned Steve Englehart interview from MARVEL AGE #29, with all four pages of text unfortunately crammed onto one page in tiny thumbnail form. (I wear bifocals, and this interview had me holding the book about an inch from my eyes in an attempt to read it....Thanks, Marvel!)

MARVEL PREMIERE CLASSIC, VOL. 64: AVENGERS: WEST COAST AVENGERS- FAMILY TIES earns six out of ten devil-heads:
😈😈😈😈😈😈
Far from classic work, but there was enough decent stuff that I managed to keep slogging through.

Posted by The Crabby Reviewer at 2:59 PM