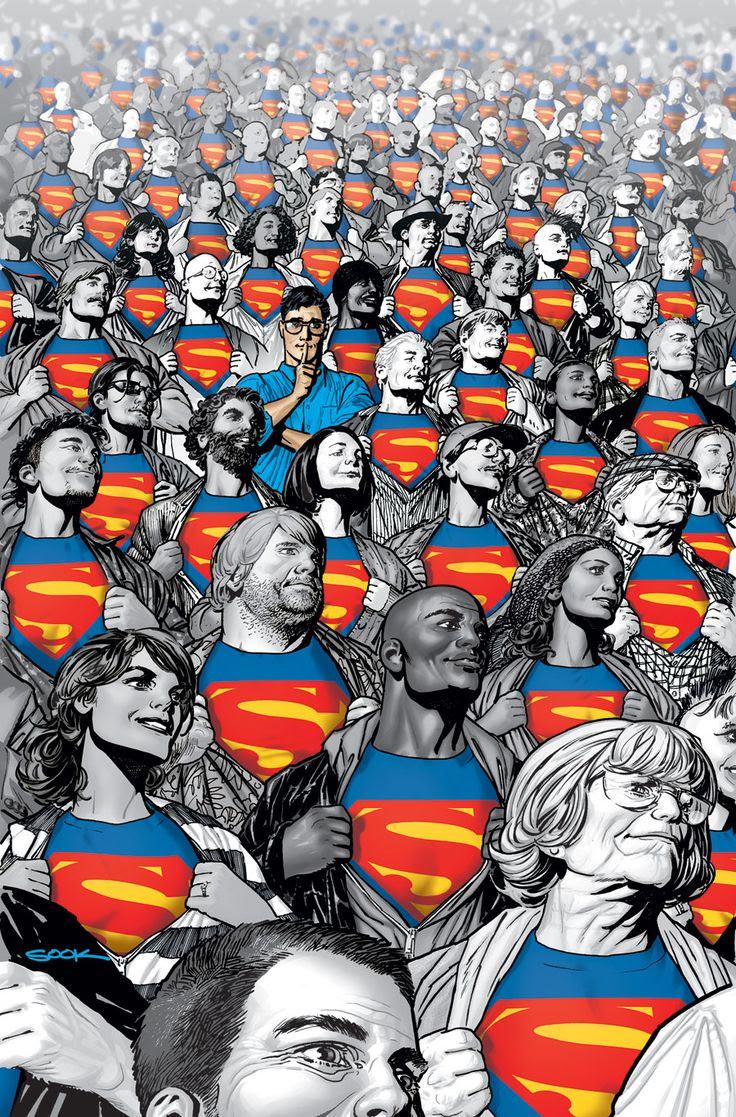 I've slowly started to realize, after over four decades of reading comic-books, that continuity is not my master, and I've accepted that the best stories are often ones that are either out-of-continuity, or occupy some nebulous space in continuity. Max Landis' SUPERMAN: AMERICAN ALIEN is just such a comic.

Max Landis has been taking a bit of a beating online this past week, as it was announced that he would be writing and directing a remake of his father John Landis' legendary horror-comedy AN AMERICAN WEREWOLF IN LONDON. To say that the internet is not happy about this would be an understatement. I'm not a fan of remakes in general, or remakes of really good films in particular. However, after reading this book, I'd be willing to plunk down my ticket money and see what Max Landis has to offer when/if the film is released.

As I mentioned above, this is not a tale that follows strict SUPERMAN canon, but who can even tell what is or isn't canon with DC these days? This is also not a traditional origin story, as Landis uses the seven issues that comprised the mini-series to tell stories from different points in the life of Clark Kent, with each tale being illustrated by a different artist. Landis tells some beautiful, touching stories about Clark's life, ranging from his early childhood to his time as Superman.

Each issue has a completely different feel, and the artists were, in general, well-chosen to match the subject matter of that particular chapter. The book opens with the story of how young Clark learned to fly, and it's not the happy, joyful tale that you might be expecting. Landis keeps the tone light, but I'm the parent of a young boy, and the scenes where Clark seemed ready to float off into space, unable to control his flight, were very unsettling. This is juxtaposed against the parental relationship, which Landis adds a new twist to: A lot of the residents of Smallville know that Clark is an alien, and possesses strange powers. I can't imagine how a secret like this could possibly be kept amongst all of these people, especially when Clark travels to Metropolis and becomes Superman, but...I really didn't care. Landis makes the small-town love and compassion come alive, and I bought into it completely. The second chapter takes a much darker turn, as a teen-aged Clark learns about evil when a group of drug-addled thrillkillers cut a swath through his small town. Landis handles every era of Superman well, but the first three chapters, which feature only Clark, really sing.

In the third chapter, Landis begins seeding in characters from the extended DC Universe, including Oliver Queen, Barbara Minerva (The future Cheetah, who Clark appears to lose his virginity to!), Deathstroke, Ras Al Ghul, Bruce Wayne/Batman, and others. The fourth chapter begins his transformation into Superman, and the book concludes with a massive throwdown with Lobo (The REAL Lobo!!!) in the streets of Metropolis. He handles action well, but the true heart of this book is Landis' portrayal of Clark as a real, flawed human being. He genuinely wants to help people, but is struggling to find his way, to know when to jump in and when to step back.

I'd put SUPERMAN: AMERICAN ALIEN up there with some of the best SUPERMAN stories I've ever read, including Alan Moore's "Whatever happened to The Man of Tomorrow?" and "For the man who has everything" and the phenomenal Jeph Loeb/Tim Sale collaboration SUPERMAN FOR ALL SEASONS. High praise, indeed, and highly recommended.

Posted by The Crabby Reviewer at 11:19 AM