I am sooooo glad that this is over.

The first story is a standalone, and features Wonder Man, fresh off the success of his new movie, tangling with Hulk villain The Abomination. Of course, this being a Steve Englehart story, it's not that simple: It's actually The Abomination's body with the mind of Tyrannus. As this entire series has proven, Englehart is not one to do anything simple and straightforward...not when convoluted and overly complex will do.

After that, we get to the four-part Zodiac epic. Marvel has, in it's long and illustrious history, published some fucking weird stories. Englehart seemed bound and determined to revisit each and every one of them. This story calls back to Nick Fury's old series, an obscure Iron Man /Daredevil crossover, and a few other forgotten tales from yesteryear. I can't really give a recap, because my eyes were glazed over the whole time I was reading. As usual for Englehart, The West Coast Avengers, the world's most reactive super-hero team, stumble across a plot by The Zodiac to do...something. There's a Life Model Decoy of Nick Fury's dead brother, who has built other Life Model Decoys and created a new Zodiac, who go nuts robbing places while the last surviving human member of the old Zodiac gets the Westies to do his dirty work for him, and fight the robo-Zodiac. There's a lot of mumbo-jumbo about the Zodiac Key, and another dimension filled with people who like to fight...it's all pretty unintelligible, and it's made worse by Englehart's obsession with Astrology, which the Zodiac characters go on and on and on and ON about...I'm really glad that Marvel, mercifully, didn't collect the last 8 issues of his WCA run, otherwise I might still have another volume to go. The last issue of the Zodiac epic is saved by making it a small-scale throwdown between Moon Knight and Taurus, which gives Milgrom the opportunity to draw some lovely chase and fight scenes.

The final issue in this collection is the most out-there and plain-old-weird story Englehart has mired the team in yet. An alien race, plotting an invasion, abducts the WCA team and makes them, one-by-one, fight a robot that tests their skills. I get the impression that this story was done just so they could run this cover, depicting what the aliens assume all Earthlings must look like, based on the data the robot transmitted back home: 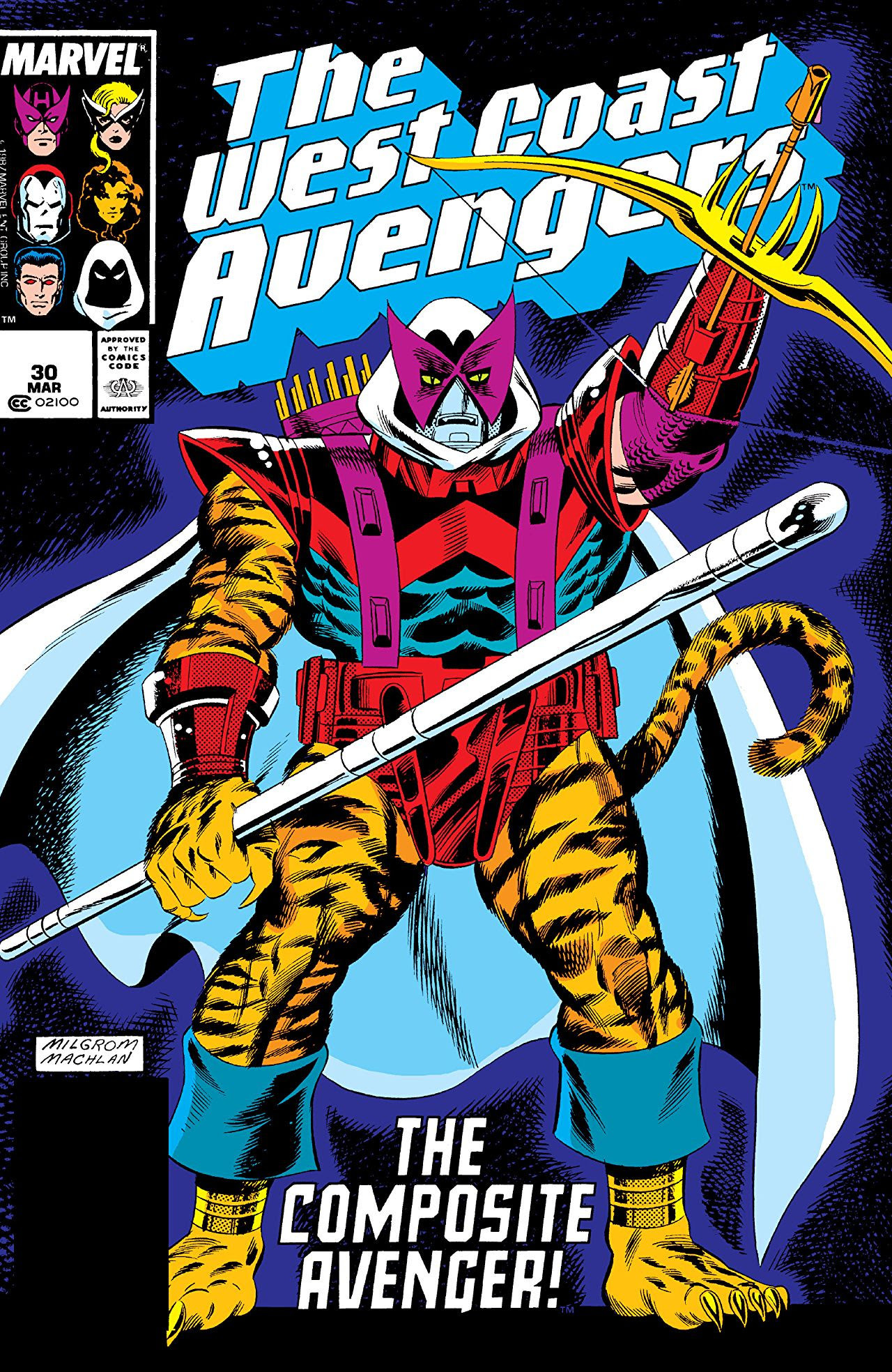 I'm almost, almost tempted to seek out floppies of the rest of Englehart's run, just so I can see if/how he resolved the Vision/Scarlet Witch/Quicksilver problem, but...eh. I'll live not knowing, I suppose.

All I can say is, thank God that Crabs, Assemble! is done with Steve Englehart. Wait, what's that you say...? Our next collected edition has three oversized Steve Englehart stories in it...? And one by another of my most hated Steves, Steve Gerber...? Give me strength. OK, let's get it over with....

Posted by The Crabby Reviewer at 1:38 PM