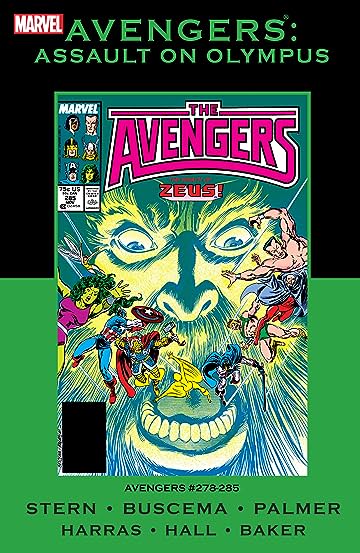 In which The Avengers kick the asses of the Gods themselves.....

When last we saw The Avengers, they were recovering from a harrowing battle with Baron Zemo's Masters of Evil, which saw Jarvis mercilessly tortured by Mister Hyde, and Hercules beaten to death (At least for a minute...) by Hyde, Goliath, and The Wrecking Crew. The team pulled out a close victory in the end, thanks to a last-minute assist from Thor, Ant-Man, and Doctor Druid, but the humbling they received at the hands of Zemo and company, as well as the near-complete destruction of their headquarters, left the team shaken to the core. The Wasp was ready to step down as chairwoman, Jarvis was in need of surgery to fix his shattered limbs and left blind in one eye, and Hercules was in a coma, suffering from brain damage. The Avengers were at an all-time low....

MARVEL PREMIERE CLASSIC, VOL. 74: AVENGERS: ASSAULT ON OLYMPUS, which collects THE AVENGERS #'s 278-285 (The end of legendary writer Roger Stern's run on the book), finds the team rebuilding the mansion, and adding two new members to the roster (She-Hulk and Doctor Druid), as well as welcoming back Namor, The Sub-Mariner, from his leave of absence.

The hospitalized Jarvis faces the choice of staying on with the team, or retiring from his position, in an earnest but poorly-written fill-in issue by Bob Harras, Bob Hall, and Kyle Baker. The issue wasn't anything to write home about, but it provided a nice overview of Jarvis' career with the team,  including some odd moments, such as when he betrayed them to Ultron (!!!). Of course Jarvis decides to stay the course, proving that he is just as courageous as, if not more so, the legends that he serves.

The bulk of the collection offers a redemptive arc for the team, as they fight back from their most staggering defeat and accomplish one of the most impressive victories ever, defeating the Greek Gods themselves in their quest to recover their abducted teammate Hercules, who has been taken by his family back to Mount Olympus.

Zeus, listening to the addled ramblings of his gravely injured son, holds The Avengers responsible for Hercules' injuries, banishing the team to the underworld of Hades as punishment. Stern depicts the camaraderie of the team perfectly, as they mesh together in attempt to escape Hades, recover Hercules, and defeat Zeus and his children. This would be Stern's swan song on the book that reached new heights under his auspices, and it's a fitting one. The Avengers have rarely had such stand-up-and-cheer moments as they do in this collection, from their valiant stand against a grief-stricken Zeus to a broken and battered Captain America tossing his shield to Namor so that he can continue the battle on Cap's behalf. All of these amazing moments are stunningly depicted by the legendary art team of John Buscema and Tom Palmer, who are in rare form. If the Stern reign had to end here, it ended on a high note.


Posted by The Crabby Reviewer at 4:15 PM