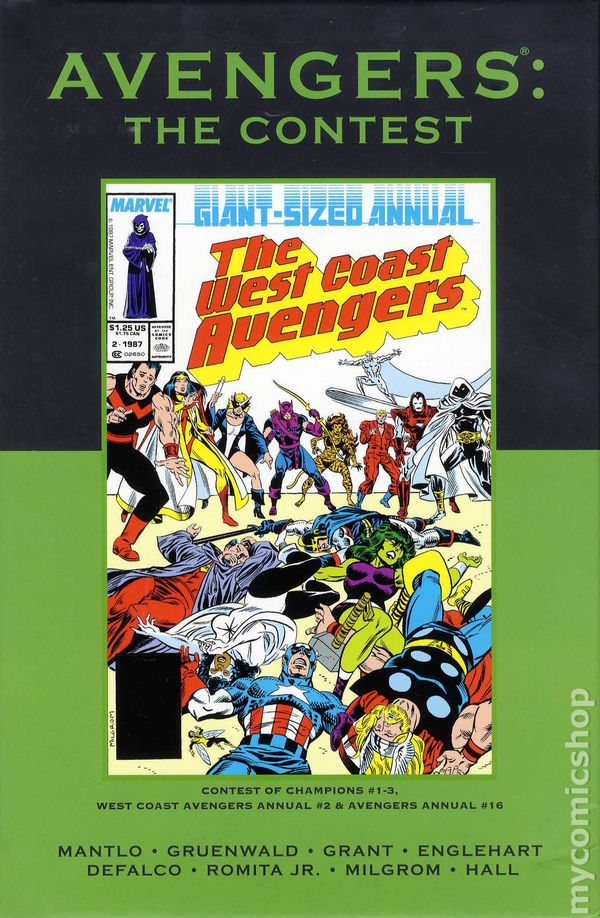 I remember excitedly buying the premiere issue of Marvel's very first mini-series, CONTEST OF CHAMPIONS when I was a kid. That excitement quickly died when I actually sat down and read the book. I didn't bother with the final two issues. I bought a collected edition a long time ago, and hated it. So what do I do? I turn around and buy ANOTHER collected edition, and I hated that one, too.

As Tom DeFalco explains in his 1999 introduction, CONTEST was originally conceived as a treasury edition tie-in to the 1980 Winter Olympics. When The United States decided to boycott the Olympics, Marvel shelved the book, but no one ever told inker Pablo Marcos, who kept working on the pages. When he finally asked when Marvel was actually going to publish the book, it was too good an opportunity to pass up: A finished epic starring every Marvel superhero, just waiting to be published. There were a few story and art tweaks to be made, and the treasury-sized story was broken up into three parts and published as Marvel's very first "Limited Series" (Unfortunately, this volume doesn't show any of the pre-correction art, or delve into the original story. There was an issue of BACK ISSUE magazine that was a veritable treasure trove of never-before-seen CONTEST art, and I advise interested parties to track it down. It's much better than the actual series was.)

The story, such as it is, involves The Grandmaster and "The Unknown" (Death...) playing a game for the life of The Grandmaster's fellow Elder of The Universe, The Collector. They each pick a team, comprised of Marvel's best and brightest, and pit them against each other. The main problems with this concept being:
1)- They don't actually pick the best and brightest, instead opting for a lot of new international heroes, such as Shamrock, Sabra, Peregrine, etc., who were all created for this series as some kind of half-hearted attempt to capture international readers.
2)- They assign the contest FOUR ROUNDS. What? That's just asking for trouble.....

That trouble arrived in the form of an ending that no one at Marvel noticed until after the book was published. The contest actually ended in a tie, but everyone forgot what team Shamrock was on, and it looked like The Grandmaster had won, thus necessitating a sequel that no one asked for, which played out in the pages of two AVENGERS annuals.

The first part, written by Steve Englehart, finds East and West Coast Avengers pitted against one another. The second part, written by Tom DeFalco, finds the teams facing a battalion of dead friends and enemies. Each chapter is equally bad.


MARVEL PREMIERE CLASSIC, VOL. 45: AVENGERS: THE CONTEST earns a pitiful one out of ten devil heads.
😈

Posted by The Crabby Reviewer at 2:47 PM