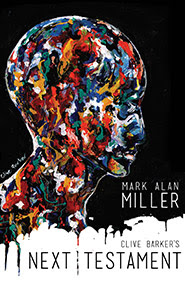 Of course, Barker's God might be a little different from the one you're used to.

CLIVE BARKER'S NEXT TESTAMENT is actually written by Mark Alan Miller, who does a better job at being Barker than Barker himself did in THE SCARLET GOSPELS. This tale of a vengeful God returning to Earth was originally presented as a twelve-part comic-book mini-series with the same name. Barker gets his name in the title, but Miller gets the writing credit...I have no idea just how this book came about, but I would love to find out....Was this Barker's idea, with Miller doing the heavy lifting? Did they collaborate? Did Miller do all of the work, and slap Barker's name on it to sell copies...? Whatever the case, Miller proves himself to be a capable writer, and this feels like old-school Clive Barker, which is good enough for me.

The book starts strong, with nasty billionaire Julian Demond unearthing a buried figure that claims to be God. Not the kindly, benevolent God, but the petulant, petty, spiteful God of The Old Testament. He calls himself Wick, and he sets off with Demond to reacquaint himself with his creations, and judge their worthiness.....

As I said, the book starts strong, and gains steam rapidly, as Demond introduces Wick to the world, and Wick isn't thrilled about what he sees. A lot of people die, a lot of property is destroyed, and bad things happen to good, and not-so-good, people. Wick's opposition is basically limited to two people. Julian Demond's son, Tristan, and his girlfriend, Elspeth. This is where the book bogs down...neither Tristan or Elspeth are particularly interesting characters, and their road trip to find a way to stop Wick quickly degenerates into a rote series of getting captured by bad people, threatened with death, rape, torture, etc., and escaping. The episodic nature of their escapades might work well on a weekly TV show or a monthly comic-book, but the drudgery of reading the cycle of capture/escape/capture in a novel made me dread picking up the book at times. Miller does manage to pull things together for a rousing, if slightly rushed, conclusion, that was both thrilling and ludicrous. Whichever one it was, I enjoyed it.

As a first novel, CLIVE BARKER'S NEXT TESTAMENT is an impressive piece of work. I would have preferred if the middle section had been edited down a bit, but the ride was worth the speed bumps.

Earthling Publications provided a review copy.
Posted by The Crabby Reviewer at 1:37 PM