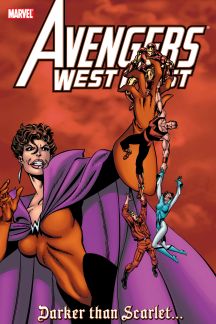 Once again, John Byrne loses his temper and storms off, taking his ball with him...

I covered a chunk of this material in my ACTS OF VENGEANCE! OMNIBUS review, so I won't go into too much double-dipping. The collection starts off with Iron Man's return to the team and their final face-off against Master Pandemonium, goes full-tilt into the big ACTS OF VENGEANCE! crossover, and concludes with the aborted "Dark Scarlet Witch" storyline.

Byrne had been moving all of his pieces into place for a while, slowly driving The Scarlet Witch over the edge by deconstructing her husband, The Vision, and revealing that her twin sons were a figment of her imagination. This is where the collection goes a little off the rails.


First off, this volume omits the WEST COAST AVENGERS ANNUAL, written and illustrated by Byrne, that provides the last piece in the mental breakdown of The Scarlet Witch: Her capture and brainwashing by Ghaur, who kidnapped her to use as a bride of Set. Since that event is referenced heavily in the rest of the collection, I would have assumed that its inclusion would have been a no-brainer.

Also, Byrne was writing both AVENGERS titles at the time, and he engaged in some odd cross-pollination between the titles. He had Starfox's search for Nebula play out in AVENGERS WEST COAST, even though it would ultimately be concluded in THE AVENGERS, and he has Magneto's abduction of The Scarlet Witch take place in THE AVENGERS, in a sequence that is not collected here, which leads to some head-scratching moments for people who are not aware of what happened. Sloppy.

Also, the Magneto storyline coincided with the inevitable John Byrne meltdown where he quits in a huff and storms off of a book, leaving the publisher and fans in a lurch. This lurch meant that AVENGERS WEST COAST had, in the middle of a very important storyline, two issues written and illustrated by fill-in teams, neither of which are collected here. (The first, a battle against Vibro, is unimportant. The second, which finds the team facing Hydro-Man, had a surprisingly dark ending that is referenced later in this collection.)

It does, unfortunately, collect the three issues by Roy Thomas, Dann Thomas, and Paul Ryan that wrap up the Magneto storyline. Byrne had been building up to something involving The Scarlet Witch having time-based powers and being stalked by Immortus (Who I CANNOT...FUCKING...STAND. Sorry. But I hate Kang, and Immortus IS Kang, so....Anyway, I hate time-centric stories.), and The Thomas duo takes that and runs with it, shuffling Magneto offstage and making Immortus the big bad. The real threat here, however, is the wordiness of their scripts, as we are beaten and battered with page after page of endless, stultifying prose, alternate timelines, time travel, time paradoxes....ugh. I can't fucking stand it. Byrne walked out of a ton of books in the middle of a story, but this has to be one of the most depressing Byrne "What coulda been" stories ever. This could have been great...instead, it dissolves into a pile of wet, drippy shit.

AVENGERS WEST COAST: DARKER THAN SCARLET coulda been one of the all-time greats. Instead, it gets a middling seven out of ten Dark Devil Heads:
👿👿👿👿👿👿👿