Crabby Movie Review: War For The Planet of The Apes

Letdown on The Planet of The Apes.


Oddly enough, my genre-hating wife shares my love of the relaunched PLANET OF THE APES franchise, so we were both really looking forward to seeing the trilogy-capping WAR FOR THE PLANET OF THE APES. Having seen it, we now think a much better name for this installment would have been BRIEF SKIRMISH, SNEAK ATTACK, RUN AWAY AND THEN GET CAPTURED ON THE PLANET OF THE APES. This is a serious, serious letdown after two phenomenal entries in the series.

I'm naturally pessimistic, so whenever a new installment in a film series comes out, I try to keep my expectations in check, lest I be disappointed. I loved IRON MAN, so the stinky IRON MAN 2 and IRON MAN 3 really disappointed me. I loved GUARDIANS OF THE GALAXY, so I hoped for the best and expected the worst from the sequel, and I was thrilled that it was so good. PROMETHEUS was an interesting disappointment, so I had a low bar set for ALIEN: COVENANT, which was also an interesting disappointment, but I had such diminished expectations for it that I pretty much got what I expected. This one took me by surprise, though. WAR FOR THE PLANET OF THE APES has been getting such good reviews that I was left wondering if the critics had seen the same film.

The film starts off with Caesar's ape encampment under attack by human soldiers, who have been sent by "The Colonel", played by Woody Harrelson. The apes rout the invaders, and Caesar sends the survivors back to The Colonel with a message: The ape that started the war (Koba) is dead. Leave us alone in the forest, and no one else, ape of human, needs to die.

Of course, The Colonel can't leave well enough alone, and the hostilities escalate, leading to the apes running off to find a new home, and Caesar heading off alone to seek vengeance on The Colonel. 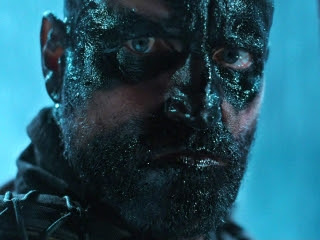 The good news: Woody Harrelson makes the most of a purely generic mustache-twirler of a villain. For a film like this, you're clearly supposed to be rooting for the apes, but....chances are good that the audience is made up of humans, so a good writer will also craft an antagonist that you can sympathize with. As far as The Colonel knows, these apes are the cause of everything bad that has happened to humanity, so they've got to go. Motivation enough, right? But no, the writer had to throw in a ham-fisted Trump allegory about The Colonel needing slave apes to BUILD A WALL to keep out undesirables, in this case a non-crazy group of soldiers that are out to take him down. So what you're left with, after coming in expecting (And who knows WHY we would expect this...) a WAR FOR THE PLANET OF THE FUCKING APES, is a film delivers all of the apes being captured, tortured, and enslaved for the whole movie. We've come to expect Caesar to be a mover and shaker, but he's nothing more than a passive observer for most of the film, and when the promised war does come, it's between two factions of humans, while the apes basically slink away and hide. 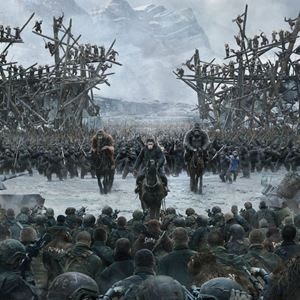 
Also good: Steve Zahn as "Bad Ape", a cautious, wizened old primate who is overjoyed at finding another talking ape. Zahn is hilarious, and brings a lot of life to an otherwise dour, joyless film. As usual, the effects are great. I was spellbound by a lingering shot of Caesar's sidekick, Maurice, as the camera focused on his face and showed off the detail work that went into every pore and strand of hair. This should be a shoo-in for a visual-effects Oscar.

The bad...? Aside from the whole film just feeling like a complete misfire, the detour taken with the introduction of the mute little girl just seemed like a long way to go to get to the part where Maurice  names her Nova. And the mutation of the disease that wiped out mankind also seemed like a lot of added nothing just to explain why the humans in the original POTA films were mute and stupid.

In addition to my wife and I, who both felt very disappointed, we took our eight-year-old son, who liked it, our fourteen-year-old daughter, who has NEVER SEEN AN APES FILM (!!!!), but enjoyed this one, and we were accompanied by my wife's ex-husband, another POTA fanatic, who was equally disappointed. I guess the best way to describe how we all felt is to equate this prequel series to George Romero's LIVING DEAD films. Romero made three great films, but was always hamstrung by budgetary restraints that kept him from making the big finale that he dreamed of. LAND OF THE DEAD was supposed to be that big blowout, but when it finally arrived, we were left with a collective "THAT'S IT....???". WAR FOR THE PLANET OF THE APES feels like a filler TV movie that's supposed to tide you over until the real trilogy finale comes out. There were enough great performances and beautiful visual effects to keep me vaguely interested, but this was a very disappointing film overall, and a sad way to end what was 2/3rd's of a brilliant trilogy.

WAR FOR THE PLANET OF THE APES earns a meh five out of ten apes:
🙈🙉🙊🙈🙉

You always break my heart in the end, Fox.

Posted by The Crabby Reviewer at 2:07 PM