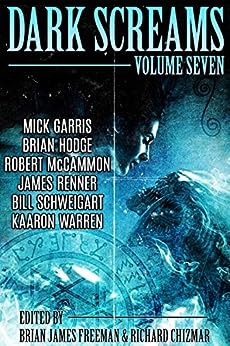 Once again, editors Brian James Freeman and Richard Chizmar have assembled a lineup of veterans and relative newcomers, and come up with an entertaining assortment of new stories and reprints.

Robert McCammon's 1989 short LIZARD MAN opens the collection. With a title like that, I was expecting a story about a reptilian Bigfoot, but what McCammon delivers is slightly odder, but just as satisfying. The Lizard Man of the title is an aging alligator hunter, who is after a legendary giant of a gator named "The Old Pope". Before the night ends, he'll confront the beast, but find that it isn't quite what he was hunting for. A fun little story, with a totally unpredictable ending.

Next up is James Renner's A MONSTER COMES TO ASHDOWN FOREST (IN WHICH CHRISTOPHER ROBIN SAYS GOODBYE), which finds an elderly, dying Christopher Robin setting out with his caretaker to find the killer of a little girl who was found dead in the hundred-acre wood. This was a well-told story, and I sincerely hope that Renner does not find himself on the wrong side of Disney's army of lawyers. This was my first exposure to Renner's work, but I'll be keeping an eye out for him in the future.

Kaaron Warren's FURTHEREST is a traditional ghost story at heart, and while it was mildly engaging, it seemed like a very long way to go for very little payoff.

The highlight of the collection is Brian Hodge's new novella WEST OF MATAMOROS, NORTH OF HELL, a nightmarish excursion into Mexican folklore. While shooting photos for their new album on the site of a series of ritual murders, a rock band is abducted by a drug cartel. Hodge wrings every bit of terror out of this story; it's absolutely one of his best, and is worth the price of admission alone.

Bill Schweigart's THE EXPEDITION has an interesting premise (A Nazi expedition to find supernatural artifacts), but is hamstrung by its length. The story leaves the door open for more, which could be a great thing if Schweigart is given more room to work in.....THE EXPEDITION seemed rushed and half-baked.

The collection closes with Mick Garris' SNOW SHADOWS, which was originally published as part of Cemetery Dance's Novella Series in 2012. I'm generally not much of a fan of Garris' writing, but this story, which features a disturbed preteen obsessed with his dead teacher, is probably his best work to date. Well-developed characters keep the story moving along, and it was just the right length.

DARK SCREAMS, VOLUME SEVEN is a solid, enjoyable collection, and earns a respectable seven out of ten dark hearts:
♥♥♥♥♥♥♥

Posted by The Crabby Reviewer at 10:47 AM