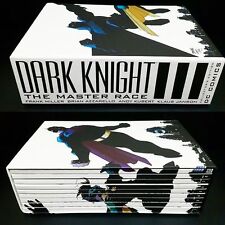 Was the world crying out for another visit to Frank Miller's DARK KNIGHT continuity...?

I know I certainly wasn't. Miller's first sequel, DK2: THE DARK KNIGHT STRIKES AGAIN was dreadful....I remember nothing about it, save for how much I hated it. So when DC announced DARK KNIGHT III: THE MASTER RACE, I had a lot of conflicting thoughts:

Brian Azzarello is listed as Miller's co-author, and Miller isn't drawing it. That means DC wanted a sequel (CASH GRAB!!!) with minimal Miller involvement. That means it might be decent. Aside from being a cash grab.....

Softcover AND hardcover formats for each issue...? Cash grab!!! )But those hardcovers do look mighty attractive...)

Around a dozen variant covers for each issue, with some of them incredibly rare...? Cash grab!

This sounds a lot like BEFORE WATCHMEN, and the inclusion of the Moore/Gibbons WATCHMEN characters in DC REBIRTH.....a desperate attempt to further monetize a past success that has been nearly bled dry.

"THE MASTER RACE"....? Really? Frank Miller and a title reminiscent of Nazis......bound to stir up trouble.

With all of that said: I am a sucker, so I dutifully picked up each hardcover issue as they were released, awaiting the day I could house them in the lovely slipcase that was to be included with the third volume. In order to avoid spoilers, I dodged reviews and articles as best I could, but the ones that I did see seemed scornful, mocking, and disdainful. The best I hoped for was a maybe-not-entirely-terrible set of books in an attractive package.

So.....Sitting down to read the nine-book-set exactly one week ago, I was struck by an age-old conundrum: What makes one mindless slugfest book better than another? Because this book is, for the most part, nine issues of mindless action, much like the recent JUSTICE LEAGUE/SUICIDE SQUAD crossover. While the JL/SS book was unbearably awful and unreadable, DARK KNIGHT III: THE MASTER RACE was...dare I say it...? Fun. Mindless, stupid, unnecessary, but...fun.

The "Master Race" referred to in the title are Kryptonians, specifically the citizens imprisoned in The Bottle City of Kandor. Sick of being relegated to bottle living, they dupe Lara, the daughter of Superman and Wonder Woman, into enlisting The Atom's help in regaining their size and their freedom. The Atom enlarges the pissed-off bottle-dwellers, they run amok, and cause all kinds of havoc on Earth.

The book opens with former Robin Carrie Kelly wearing the mantle of the bat, but Bruce Wayne is alive and well, and the two soon find themselves on a pilgrimage to find Superman, drag him out of his self-imposed exile, and enlist his help against his fellow Kryptonians.

The credits list Frank Miller and Brian Azzarello as writers. I have no idea how the work was split, if indeed it was split. Miller initially seemed to be playing an almost negligible role in the creation of the series, but by the time the finished product hit the shelves, he was contributing covers, variants, and illustrating most of the related mini-comics that appeared in each issue. So, either Miller has gone soft, or Azzarello was calling the shots, but the asshole Batman of past DARK KNIGHT books has been replaced by a kinder, gentler, wiser Batman. He respects the opinion of Batgirl. He seeks redemption, and attempts to repair his fractured relationship with Superman. He offers a bit of hope to the citizens of Gotham City, rather than instilling even more fear than they're already feeling. The final pages leave the door open for a sequel, and I'm OK with that, as long as we don't go back to asshole Batman again. I enjoyed the art in the main story, which was supplied by Andy Kubert and Klaus Janson, and had a "Squint and you'll think Miller and Janson did it!" quality to it. The art and colors really popped in these Deluxe editions, and the thick paper looks and feels awesome.

The cons...? Well, it's a big, endless fight scene. Which, as I said earlier, worked wonderfully in this book, while it falls flat in so many others. There's also a complete lack of explanation or context given to anything in this series. If you were a casual fan who got lured in by the advertising and commercials that DC is getting ready to unleash, you would probably have no idea who most of these people were, or what they were doing. Why is Kandor in a jar? Why is Batman so old? Why is Superman frozen in ice? When did Superman and Wonder Woman have two kids? Where are Commissioner Gordon, The Joker, Alfred? Who are Hawkman, Hawkwoman, Green Lantern? Why does Green Lantern's hand live on and fight crime after being severed? I've been reading comics for almost 45 years, so I'm up to speed. Other readers may not be so fortunate. (Or UNfortunate, depending on how you feel about middle-aged men having encyclopedic knowledge of fictional characters and the universes they inhabit.) A perfect example of this "You'd better know what's going on already, because we ain't stopping to explain!" mentality comes after Batman is mortally wounded, and Superman flies him across the world and dumps him into a Lazarus Pit. I know what it is, YOU may know what it is, but a lot of readers, real and potential, will not, and the introduction of it into the story changes the narrative completely. Publishers need to at least try to make these books, especially event books like this one, accessible to new readers, otherwise the industry is just going to cannibalize itself and die as us middle-agers croak, lose interest, or just get fed up and leave.

Each hardcover features a back-up story that expands on a scene or theme in the main story, and I have no idea how these will be treated in the collected edition. (DC sent me a digital copy of the collected edition, but I opted to read my hardcovers instead.) They seem absolutely necessary to collect in the place they are now: Main story, back-up, main story, back-up...but, with DC, you never know. If the back-up stories are collected in a weird way, take my advice, and read each one after the issue it was originally published with. It may break up the flow of the main story, but you'll get more out of the book by reading them this way.

Another pet peeve of mine is when the collected edition doesn't include a complete gallery of covers. I know for a fact that this book doesn't have all of the covers, because DC published them in a separate hardcover, which I was foolish enough to run out and buy, because, as Kris Shaw would say, I hate my money.

Completely unnecessary, but a lot of fun,  DARK KNIGHT III: THE MASTER RACE earns eight out of ten bottled cities:
🍾🍾🍾🍾🍾🍾🍾🍾

DC Comics provided a review copy, which I deleted because I already owned the sweet slipcased hardcover set. Totally the way to go.


Posted by The Crabby Reviewer at 4:04 PM