Back into the binge-reading trenches, with Marvel's mighty green goliath, The Incredible Hulk!

The book opens with an introduction by Steve Englehart, which offers a lot of insight into his run on the book, broken down issue-by-issue.

From there, we encounter The Rhino, The Leader, one of my most-hated 1970's concepts, the dreaded "Counter-Earth" and it's bizarre Beast-Men, Adam Warlock, before Jim Starlin made him interesting, The Abomination, General "Thunderbolt" Ross and his daughter, Betty, Tiger Shark (Lurking in NIAGARA FALLS, or all places!!!), The Beast, The Mimic, we meet The Wendigo for the first time, as well as The Gremlin, son of old-timey Hulk villain, The Gargoyle. We travel under the sea, to journey alongside "Captain Omen" (Spell it backwards...) and his mutated crew, we watch as Nick Fury plots a secret rescue mission, we fight Zzzax alongside Hawkeye, watch in horror as MODOK turns Betty into the Gamma-Ray spawned monstrosity, The Harpy, and travel to a city in the clouds to clash with The Bi-Beast, before plummeting back down to earth, landing on an island filled with giant aliens.

No one can say that comics moved slowly back then.

This is a staggering amount of concepts, ideas, and new characters for a mere 14 issues....If you didn't like what was happening in an issue, wait a month, and everything will be different. Plus...The Bi-Beast. How could you not love this guy??? I was never much of a fan of the work of Steve Englehart, and nothing here really changed that opinion. His stories are workmanlike, and his plots are filled with the weirdness that you can only find in 1970's Marvel. The real draw for me here was the art of Herb Trimpe. I hated Trimpe's work when I was a kid, but, much like Jack Kirby before him, my childish distaste has turned into a mature admiration. His work here is marred by the ugly inks of Sal Trapani for much of the book, but Jack Abel comes along in the last few issues to salvage the book.

My main reason for buying this particular book was to reread issues 167-170, which I had as a kid in the form of MARVEL TREASURY EDITION #26. 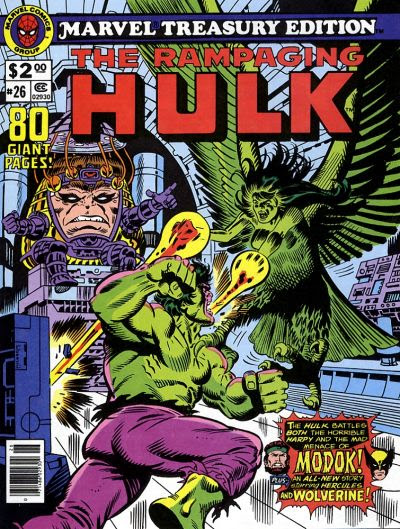 This lost volume has become very important to me since the death of my cousin Rob, who was like a brother to me. It was released when he was three years old, and I have very fond memories of spending a week at my Aunt's house in the summer of 1980, and reading this book to a delighted Rob on a daily basis. It's amazing the power that these old comics have to unleash memories....it was a good time, and it was great to revisit those precious moments over thirty-seven years later. (That book was also my first exposure to Wolverine, who appeared, alongside Hercules, in a new back-up story.)

Overall, not a great volume, but a lot of fun, nonetheless. If you don't like the story, wait a few pages, and The Hulk will be hundreds of miles away and off on a new adventure with a new bad-guy to pound on. This volume gets extra marks for featuring MODOK, who is a veritable God of a character in my eyes.