Like Unto a Thing of Iron, Part Six: The Defenders, Vol. 1: Diamonds Are Forever 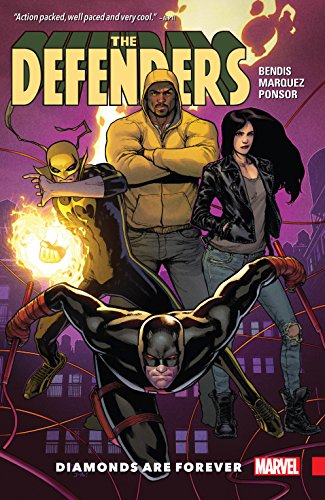 Defending the streets at a glacial pace.

Created to cash in on the Netflix DEFENDERS series, this Brian Michael Bendis vehicle, on the surface, has a lot going for it, not the least of which are longtime fan-favorite characters and beautiful art by David Marquez. This should have been a slam-dunk.

Instead, it is more of the same from Bendis. Characters who are all written with the same voice, heroes who sit around talking when they should be acting, long stretches where nothing at all happens.....This is truly Bendis at his most self-indulgent. Hopefully the cross-country move to DC will reinvigorate him. I'll probably never know, because I've reached the limits of my tolerance for super-decpmpressed stories like this one.

THE DEFENDERS, VOL. 1: DIAMONDS ARE FOREVER collects THE DEFENDERS #1-5 and the story from Free Comic Book Day 2017. (I'll never forget that particular Free Comic Book Day, since that was when my then-eight-year-old son first expressed an interest in visiting a comic-book store. We took him after seeing SPIDER-MAN: HOMECOMING, and he picked up the very cartoony-looking GUARDIANS OF THE GALAXY FCBD book, which appeared very kid-friendly. Well.......the DEFENDERS story that made up the flip-side of that issue was NOT very kid-friendly, with cursing and explicit violence. Lesson learned!) The gist of the series is that Daredevil, Power Man, Iron Fist, and Jessica Jones have to team up to stop Diamondback from taking over the New York City underworld.

Literally nothing else happens in this book.

Bendis relies very heavily on the cliffhanger crutch. The preview issue ends with Jessica Jones being shot in the stomach, at point-blank range, by a gun the size of a small child. The bullet goes into her stomach, comes out her back, and takes a not inconsiderable amount of tissue and meat with it. Next issue? Jessica is up and around fighting crime with no explanation of how or why she is still alive, aside from the fact that she was taken to a hospital. Another issue ends with Diamondback snapping Iron Fist's spine over his knee, much like Bane did to Batman. Iron Fist is back in action fighting as soon as the next issue opens. The characters joke about him having a broken back, but no explanation is given.

Why is The Black Cat, a happy, go-lucky cat-burglar turned crimefighter, running the New York City
underworld? With Hammerhead as her lackey, no less...?

Who the fuck is Diamondback, and how is he alive?

Why does no one know Daredevil's secret identity anymore?

How is Bendis able to fill six issues with nothing?

It seemed like a lot was going on, but when I closed the book, I realized that the heroes are in the exact same spot that they were in the beginning of the book. NOTHING....HAPPENED. Yeah, there were some beautifully illustrated action sequences, courtesy of artist David Marquez, but they accomplished nothing. They start the book off wondering where Diamondback is and how he is alive, and they end the book wondering where Diamondback is and how he is alive. In between, a lot of characters all speaking in the same smart-ass voice. Seriously, I have been reading Marvel Comics for nearly five decades (Ouch.), and these characters just don't talk like this. The Punisher appears for no reason, Elektra appears for no reason, Blade appears for a reason that makes no sense, Ultimate Spider-man appears for....a reason?...that is never explained, but is probably following up on something that happened in his book. (Editors: Footnotes referring readers to where they can follow up on threads like this HELP TO SELL COMICS. Just a thought.) As usual, Bendis mercilessly pads the book with endless faux-interviews, magazine articles, and newspaper editorials. All written in THE EXACT SAME FUCKING VOICE. (Honestly, there were times when I had no idea who was saying what, because the dialogue, attitude, and sarcasm were all the same, no matter who the speech balloons were pointing to. And that cliffhanger....? Really? After seeing Jessica shrug off a gunshot that left a fist-sized exit wound, I'm supposed to get worked up over an off-screen shooting...? Please.)


I paid $2.25 for the digital collection, and that was too much. The digital copy of the second volume is currently $8.95. If it were .99, I might splurge on a copy, if only to see who is behind the whole Diamondback nonsense, because I'm still a sucker for knowing the whole story. Until such a drastic price cut, I'll just have to wonder.....

THE DEFENDERS, VOL. 1: DIAMONDS ARE FOREVER was a pointless waste of time, and earns a measly four out of ten diamonds:
♢♢♢♢

Posted by The Crabby Reviewer at 2:23 PM