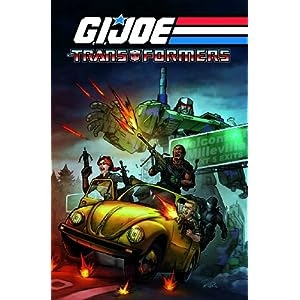 A Reminder That Not Everything From When You Were A Kid Was Great.....

I was probably 15 years old or so when Marvel released the G.I. JOE/TRANSFORMERS mini-series, and it was so hard to find on the newsstands in The Bronx that I was only able to buy issue #3. For over 25 years, I've been burning to know the rest of the story. (Because "Knowing is half the battle!"...)

Now I know, thanks to IDW, and I wish I had stayed ignorant.

The original mini-series is a hot mess....It's written by Mike Higgins, who I believe was an Editor at Marvel, and it shows. The story is terribly overwritten and wordy, Herb Trimpe's pencils are murdered by the horrible Vince Colletta inks, the coloring is terrible, and all of your favorite characters are mainly offscreen. Cobra Commander appears in issue #1, and by issue #2, he's dead...killed off in an issue of G.I. Joe. Optimus Prime is dead when the book opens, and is never seen again. Snake-Eyes is a bit player, as is Scarlett. Where's Megatron? So we're left watching the also-rans go through their paces for four excruciating issues. Bad, bad stuff.

Next up is a four-issue arc from late in Marvel's G.I. JOE run, which is written by Larry Hama and (Mostly) drawn by Chris Batista. This story is a vast improvement, but still leaves a lot to be desired. The art takes a huge nosedive in the final issue, where a mob of mediocre talents pitch in to meet a blown deadline.

I was never much of a fan of THE TRANSFORMERS (Although that, strangely enough, never kept me from buying the comic every month when I was a kid....), and G.I. JOE always had just enough of a ridiculous aspect to it to keep me from fully buying in, but I still had high hopes for the crossovers.....I guess you really can't go home again.

Posted by The Crabby Reviewer at 5:01 PM