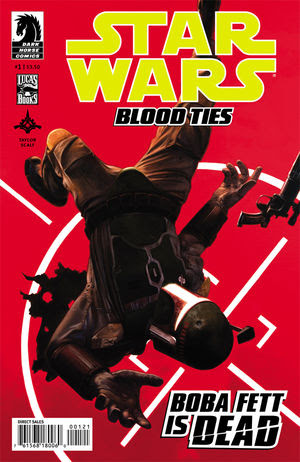 When I first heard that Disney had acquired the STAR WARS property, the first thing I thought was "Wow, that's the end for poor Dark Horse...." Not "Poor Dark Horse" like the loss of STAR WARS is going to put them under. What I meant was "Poor Dark Horse" like, these people literally kept the franchise alive in the 1990's, when everyone else had stopped giving a shit. Dark Horse kept the high-quality comics coming, and I really do feel that they kept STAR WARS alive at a time when everyone else had moved on. And the thanks they get? Disney is going to pull the license and publish in-house, through their other new toy, Marvel Comics.
Good luck with that.
Anyway, ya did good, Dark Horse. A lot of the time, you even did great.

So as we tick down this last year of Dark Horse STAR WARS books, we get their second BLOOD TIES offering, STAR WARS: BLOOD TIES- BOBA FETT IS DEAD. I liked the concept of the BLOOD TIES umbrella, which was set up to explore the relationships between SW characters that had, say it with me.....Blood ties. The first offering, STAR WARS: BLOOD TIES- JANGO AND BOBA FETT was better than expected, so I was anticipating the follow-up. I wasn't expecting a direct sequel.....especially one that relies heavily on knowledge of the previous installment, and doesn't really give any kind of recap. (I read thousands of comics and hundreds of books a year, I work over 60 hours a week, I watch movies and read magazines and play video games and have a Wife and kids and a mortgage and I've been shoveling feet and feet of snow for the past two weeks.....I'm sorry, but I don't remember every detail from a mildly amusing trifle of a story I read almost two years ago.) The plot finds Boba Fett dead, assassinated by a team of Bounty Hunters. Someone starts picking off the members of the hit-team. There's a red herring involving the Son of one of Jango Fett's clones, who was the maguffin in the first BLOOD TIES mini-series, but you know from the title alone that Boba Fett is, indeed, NOT dead. So the mystery and intrigue that Author Tom Taylor imagines he's cooking up never exists, except in his mind. Plus, on a personal note, I don't ever need to see Boba Fett unmasked. That's like seeing Judge Dredd helmetless. Can it happen? Sure. But it shouldn't.

The art, by Chris Scalf, strives for painted photo-realism, but often veers into just looking like pictures someone cut out of a STAR WARS magazine and pasted together. I love Boba Fett, but there was almost nothing that I enjoyed about this book.
(Dark Horse provided a review copy.)