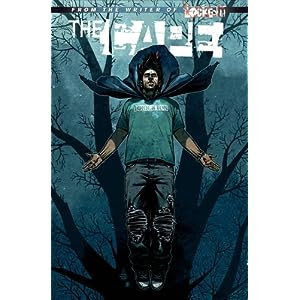 I read the one-shot adaptation of Joe Hill's short story THE CAPE a year or two back, and I really enjoyed the tale of a pathetic loser who finds a magical cape that enable him to fly. You can imagine the heartwarming moment where he decides to become a Super-Hero, and use his powers to help others, can't you? Well, not so much. This guy decides to use his power to get revenge on his ex-girlfriend, taking her out for a flight before dropping her to her death. Hill turned my expectations on their ear, so I was stoked to find that there was a follow-up mini-series on the way. THE CAPE collects that one-shot and the four-issue mini-series that followed. Hill is listed as a "Creative Consultant", so who knows how much he actually contributed to this book, but regardless, it's pretty good stuff. The mini-series opens up after the first murder, and contains more psychotic payback in the same vein. The art, by Zach Howard, is pretty good, in a Chris Bachalo kind of way, although there were panels where you really had to work to figure out what was going on. But how did this nut get the power of flight, you may ask....? Well, read on for........

wherein we journey to Viet Nam, circa 1969 (Just like the title of the book implies! Neat, huh?) and find our crackpot Super-Villain's Dad shot down behind enemy lines, where he's taken prisoner and generally treated badly. I won't spoil the weird origin of the Super-Power behind The Cape, but I will say that, as far as origins go, this is a corker. Not at all what I expected, and it was interesting to learn that the power was not necessarily where you thought it was originally. Howard's art still suffers from a few hiccups, and the story was nowhere near as strong this time around, but overall, THE CAPE: 1969 is not too shabby.
IDW provided a (Complete! Thanks, IDW!) review copy.


Posted by The Crabby Reviewer at 2:20 PM