The book, which collects THE AMAZING SPIDER-MAN #'s 211-230, and Annual #15, starts off with a strong run by Denny O'Neil, John Romita, Jr., and Jim Mooney. For my money, both O'Neil and Romita, Jr. have never been better than they are right here. O'Neil perfectly captures the "voice" of Peter Parker/Spider-Man, and his run of issues 211-218 is a marvel, no pun intended, of plotting and pacing. Issue #211 features a Spider-Man/Sub-Mariner slugfest, which leads into Spidey's first clash with Hydro-Man, in issue 212. Issue #213-215 brings back The Sub-Mariner as he teams up with Spidey to face the new Frightful Four, which includes the Sandman. After a self-contained issue featuring Madame Web, The Sandman and Hydro-Man return in what must surely be one of the strangest Super-Villain team-ups ever.

Shades of KING KONG, The Sandman and Hydro-Man are ready for their big Broadway debut.

After O'Neil's glorious run, with ends with issue #219, things hit the skids for a while. (O'Neil also wrote THE AMAZING SPIDER-MAN ANNUAL #15, illustrated by the legendary DAREDEVIL team of Frank Miller and Klaus Janson, the dreadful issue #221, and plotted issue #223's bizarre fight against The Red-Ghost and his Super-Apes.) There are numerous fill-in issues, of varying quality, before things start looking up. Issue #220 features a Spider-Man/Moon Knight team-up, featuring art by Bob McLeod. While the story is merely OK, this is a rare opportunity to see McLeod penciling a book. His art made any book a sure purchase for me when I was a kid, and it still holds up today. Issue #222 features another bad Bill Mantlo story that is somewhat saved by the clever way that Spidey defeats The Speed Demon. It seems like Mantlo wrote almost everything that Marvel published at one time or another. I liked his work when I was a kid, but it really doesn't hold up for me now.

Things kick into high gear once again with issue #224, which starts Roger Stern's legendary run on the book, and this volume closes with one of the most well-known Spider-Man stories, "Nothing Can Stop The Juggernaut!", which features a bone-crunching "fight" between Spidey and The Juggernaut. This was a favorite of mine when I was a kid, and it holds up remarkably well 32 years later. Spider-Man has never been more heroic than he is in this battle. Even though he knows he has no chance of winning, he keeps going, because it's the right thing to do.

You've gotta love Marvel's ESSENTIAL books.....You get great bang for your buck (21 issues for $19.99!), and they reprint the entire contents of the Annual, and all of the back-up material, including a feature where Spidey ranks his strength relative to the rest of the Marvel Heroes. Call me geeky, but I always loved the extra material you got in the Annuals, and it's a hoot to see it again. 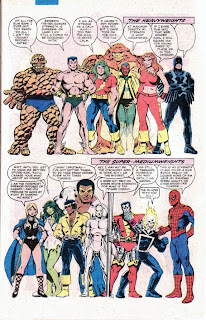 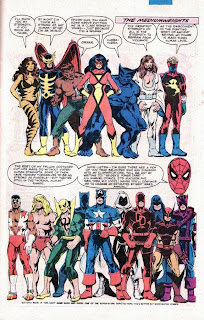 ESSENTIAL THE AMAZING SPIDER-MAN, VOLUME 10 is great fun, and a must-read for children of the '80's. Highly recommended!

Posted by The Crabby Reviewer at 1:44 PM