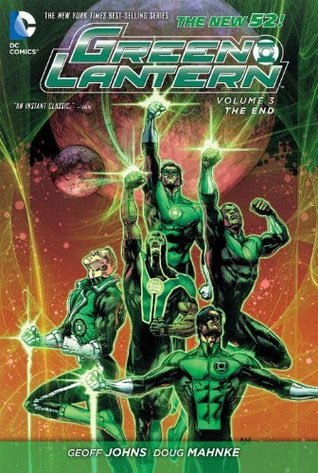 I've been there for the entirety of Geoff John's run on GREEN LANTERN, and it's been a better than average run, but when I reached the last page of GREEN LANTERN, VOLUME 3: THE END, all I could think was "It's way past time that he moved on." Much like Chris Claremont on X-MEN, Geoff Johns has been on this book for too long, and it's just degenerated into a mish-mash of ideas that are presented over and over again, ad nauseum.

This is a strange volume, in that it shares a handful of issues with the RISE OF THE THIRD ARMY crossover (Hardcover collection reviewed HERE), but then goes on to collect portions of a hardcover (GREEN LANTERN: WRATH OF THE FIRST LANTERN) which will not be available until March of 2014. So you basically get small portions of other, larger stories in this collection, and it's very unsatisfying.

The book starts off with a new Green Lantern, Simon Baz, who seems like a nice enough character, but is totally unnecessary. Why introduce yet another Earth Green Lantern right before you wrap up your run on the book? Readers who don't know that Baz's story continues in the THIRD ARMY collection will be perplexed at the way the book jumps right into the FIRST LANTERN crossover without any resolution. The "First Lantern" himself is a dreadfully boring character that exists solely to give Geoff Johns yet another reason to trot out every Lantern from the entire color spectrum, and have our main characters swap rings back and forth endlessly. Sinestro is a Green Lantern, and he becomes a Yellow Lantern again. Hal is a Green Lantern, then a Black Lantern, then a Green Lantern again. Kyle is a White Lantern, but he can become any other color Lantern he wants, whenever he wants.

My head was spinning.

And again, all I could think was "It's about time he decided to leave GL...he really ran out of ideas years ago."

And as Johns wraps up his seemingly eternal run on GREEN LANTERN, I drop another of DC's "New 52" books. This reboot is just not for me, it seems.

Posted by The Crabby Reviewer at 2:25 PM