Star Wars, Volume 1: In the Shadow of Yavin 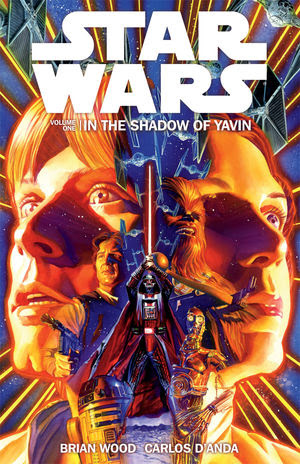 This book was hyped out the wazoo, and I got swept up in it.....Imagine, Dark Horse starting a new ongoing series that told of the Star Wars gang's adventures between the movies....I've gotta have that!!! (Never mind that Dark Horse has been publishing those types of stories for decades now....) And written by BRIAN WOOD, Author of a lot of stuff that I really didn't like (Most of his stuff...) and one thing that I did (NORTHLANDERS), and something that I'm still not sure about (CONAN). With covers by ALEX ROSS!!! (All of his stuff looks alike to me. Look at that cover image above, and tell me you haven't seen 50 other Alex Ross covers that all look just like it.) If I had actually paid it any thought, I would have just passed on this book, but when have I ever given thought to something that could potentially squander away precious hours of my ever-decreasing life span...? Never. Exactly. So away I went......to a Galaxy far, far away....

STAR WARS, VOLUME 1: IN THE SHADOW OF YAVIN picks up shortly after the destruction of The Death Star, as Mon Mothma (Every time I hear that name, I chuckle and think of Mothra.) and Princess Leia lead the Rebel Alliance in search of a new base of operations. Leia assembles a secret squadron to search out potential sites for the new base, Han and Chewbacca are dispatched to Coruscant to make a deal for weapons to aid in the rebellion, and Luke moons over an Outer Space Indian chick.Also, there's a traitor in Leia's inner circle. I'm betting it's one of these new characters we've never seen before, but I'll probably never know, as Brian Wood doesn't bring this turgid, overlong story to any kind of a conclusion, and I probably won't be back for Volume 2.

I decided about halfway through that I am totally uninterested in the vast majority of STAR WARS characters. Watching the movies now, the good guys are so bland and white bread that the only real interest I can muster up for them is nostalgia-based. I ate, slept, and breathed STAR WARS when I was a kid, but George Lucas killed that off with THE PHANTOM MENACE and Hayden Christensen's awful acting in the other two films. I'm more interested in the fringe characters, like Boba Fett and the Bounty Hunters, or the bad guys, like Darth Vader. Han Solo gets a pass because Harrison Ford gave him some charisma and personality. Luke and Leia and The Droids......not so much. And unfortunately, this first volume is heavy on Luke and Leia and their creepy lust for one another. Get a room, already!!

Wood commits what is, to me, one of the cardinal sins of prequels and in-between stories: He introduces concepts and characterizations that don't jibe with what we've already seen in adventures that take place after this one, specifically the way he makes Leia a fighter pilot and an ass-kicker. I have no problem with Leia getting out there and getting her hands dirty, but.........If you are to accept the fact that she's out there, flying an X-Wing and leading an elite squadron right after the destruction of The Death Star, then why is she right back to sitting in the control room and worrying when we get around to THE EMPIRE STRIKES BACK? Maybe Wood has some grand character arc planned, where Leia screws up so bad that she never lets herself go out in the field again, but as far as this volume goes, none of her actions rang true. Nor, for that matter, did her manner of speech and her dialogue. I thought Wood did an admirable job of capturing the voices of the rest of the cast, but Leia didn't work for me at all, and that's a sticking point, considering the fact that she is the star of this book.

Most of what worked in this book was due to the excellent art, by Carlos D'Anda. His likenesses are spot-on, and the amount of detail he imbues his panels with is, at times, mind-boggling. His Darth Vader is a sight to behold.

Whenever Vader was front and center, the book had my full attention. Otherwise, I was counting the pages until the end. This volume also includes the Darth Vader story from last year's Dark Horse Free Comic Book Day offering, and it's a cracking good yarn that really shows why Darth Vader is the badass of all badasses. It even throws in Boba Fett for good measure. This story was the saving grace of an otherwise totally forgettable book.

STAR WARS, VOLUME 1: IN THE SHADOW OF YAVIN collects the first six issues of Dark Horse's ongoing STAR WARS series, as well as the Darth Vader Free Comic Book Day story. Dark Horse continues their maddening tradition of not reprinting all of the original series covers. That drives me freaking nuts. There's plenty of room to print two or three cover images. It won't kill you, Dark Horse.....


Posted by The Crabby Reviewer at 7:57 PM