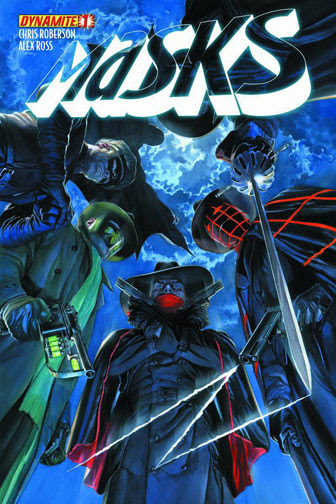 I'm a sucker for unexpected crossovers like this. You get some weird, disparate characters together, and I'll be there, whether I follow any of those characters or not. On the surface, this one seems like a natural: MASKS, VOLUME 1 gathers together The Shadow, The Green Hornet & Kato, The Spider, Zorro, Miss Fury, The Green Lama, Black Terror, and The Black Bat, as they band together to fight a corrupt regime that has taken political control of New York State, and is preparing to take over Washington next.

The script, by Chris Roberson, is all breathless action, so there's no time for any character development whatsoever. If you don't already have a working knowledge of who these characters are, you're out of luck. Zorro and The Black Bat get full-fledged origin stories, but everyone else just appears as is, which is fine (Maybe, depending on your storehouse of geek knowledge....) for The Shadow and The Green Hornet, but I had no idea who Miss Fury and The Green Lama were, and I still don't.

Roberson's script is serviceable at best, and ham-handed at worst. You'll be able to figure out who the big bad is as soon as you read a certain passage of clunky exposition early on, and even after the bad guy's identity is revealed, or I thought it was revealed, Roberson still tries to milk his identity for a shock. Weird. I guess since he didn't actually come out and give his name yet, Roberson felt it would still be a surprise. It wasn't. I did appreciate the way that Roberson winkingly included Doc Savage, who Dynamite does not hold the rights to.

Alex Ross handles the art for the first issue, and is followed up by Dennis Calero for issues 2-8. The art is decent, aside from a handful of times where sloppy storytelling had me scratching my head as to just what it was that I was supposed to be seeing.

Dynamite Comics does collections right, and MASKS, VOLUME 1 is no exception. You get all eight issues of the mini-series, the compete script for issue #1, Alex Ross' thumbnail sketches for issue #1, character designs, promotional art, and EVERY variant cover, of which there had to be at least a hundred. You get a lot of bang for your buck here.

Posted by The Crabby Reviewer at 11:17 AM