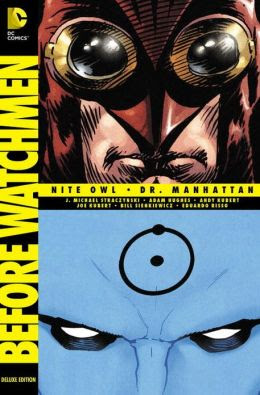 BEFORE WATCHMEN: NITE OWL/DR. MANHATTAN is the third volume in my four-volume WATCHMEN prequel binge, and it’s my least favorite so far.

I do have to say this before I start: I’m a fan of J. Michael Straczynski’s work. I’ve enjoyed his writing on RISING STARS (Which would probably be remembered as a classic, if it wasn’t saddled with such hideous art for most of its terminally-late 24 issue run…) and THE AMAZING SPIDER-MAN (Yes, I’M the one who enjoyed his run on Spidey!). I haven’t read everything that he’s written, but when he’s on, he can be really good. As I said earlier, this was my least favorite volume so far, but it was still a really good read.

The book starts strong with NITE OWL, which is actually more of an exploration of the bizarre NITE OWL/RORSCHACH team than a solo story. Kudos to Straczynski for taking a throwaway line from the original WATCHMEN and making a strong, compelling story out of it. (Although I have to say, Rorschach seems to have stumbled across a new serial killer every time he turned around.) The art, by the Son/Father team of Andy & Joe Kubert, fits the story wonderfully, and the coloring compliments their art beautifully. (Bill Sienkiewicz takes over the inking reins from Joe Kubert halfway through the four-issue run….I’m assuming Joe Kubert passed away while working on the book. The change of inker really doesn’t seem to impact the art much. I was surprised to see that there was no mention of Kubert’s death in the collection, or any kind of dedication. )

Next up is DR. MANHATTAN, which seemed a little too clever and deep for its own good. Straczynski does a good job of channeling Moore’s introspective voice, but what worked so well for one chapter in WATCHMEN stretches a little thin after four. The twisty, mind-bending narrative was certainly enjoyable, but it went on a bit too long for my tastes.

The book ends on a high note, as Straczynski teams with Artist Eduardo Risso for the two-part MOLOCH. The story follows the pointy-eared Magician from his birth through his death as a part of Adrian Veidt’s plot to save the world, and it’s quite a compelling read, but it’s marred at times by Risso’s heavy-handed art. Part of the shock of finding out that Veidt was the “Bad guy” in WATCHMEN was because Moore and Gibbons played it totally straight, and didn’t portray Veidt as a scheming, evil fuck….Straczynski does his part, but Risso has so many panels of Veidt leering, grinning, and making evil faces that it’s hard to believe no one saw this guy coming a mile off. A great story, with a few points taken off for the occasional heavy-handedness of the art.

BEFORE WATCHMEN: NITE OWL/DR. MANHATTAN collects all of the original covers, as well as variant covers, sketches, and concept art.

DC Comics provided a review copy, but I bought a hardcover anyway, because I’m mentally ill and need help.

Posted by The Crabby Reviewer at 1:14 PM