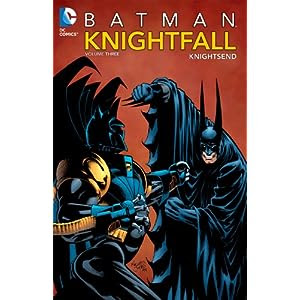 Finally!!! The conclusion to the overlong KNIGHTFALL epic!!!

The overall quality takes a marked decline in this third volume, and you can almost hear the creative team spinning it's wheels after the excellent first arc, the titular KNIGHTSEND, which finds a fully-healed Bruce Wayne training under the auspices of Lady Shiva in preparation for his inevitable battle against Azrael, who is not willing to step aside like a gentleman and give up his Batman gig.

The creative team (Headed up by writers Doug Moench and Chuck Dixon, with assistance from Jo Duffy, Alan Grant, and Denny O'Neil) are firing on all cylinders, and that excitement really shows through, as tensions reach a fever pitch: Azrael is at his nuttiest, Nightwing and Robin have had it up to here (Holds hand waaaaay above his head!), and Bruce displays some all-too-human doubts....the stage is set for an epic battle!

That battle is not quite as epic as my doddering mind remembered.....The final issue in the KNIGHTSEND arc is written by Denny O'Neil, and beautifully illustrated by Barry Kitson, and starts with a bit of dickery that sent my 23-year-old self in paroxysms of rage two decades ago: Azrael rips up a portrait of Thomas Wayne to piss off Bruce. (It doesn't do much for Bruce, but the sheer disrespect of the act drove me nuts back in the day!) What follows is a brief skirmish, which ends with Bruce BLINDING AZRAEL WITH SUNLIGHT AND SHAMING HIM INTO LEAVING!! As Ralphie said when he discovered his coded message was just a crummy Ovaltine ad:

I mean, seriously....This guy KILLED PEOPLE. Or person....I can't really remember. He chased away Alfred, destroyed Wayne Manor, brutally maimed a score of thugs, killed Commissioner Gordon's goodwill toward Batman...and Bruce gives him an eye-owie and calls it even.

This is followed by an Easter Egg story (It's not mentioned anywhere in the books contents or on the back cover description, so maybe it was a last-minute addition?) from SHOWCASE '94 which finds the disgraced, tights-wearing Jean-Paul Valley being crabby to homeless people. Bad stuff, but I'm glad it was included, because I have terrible OCD as far as incomplete collections are concerned.

The rest of the book collects the PRODIGAL arc, which is fairly dreadful. PRODIGAL finds Bruce, who has just overcome tremendous odds and reclaimed the mantle of the bat deciding "Eh, I don't want it!" and asking Dick "Nightwing" Grayson to step up into the big leagues. This is a totally unnecessary story. It's fun seeing how Dick fits into the role in his own inimitable way, but it's basically twelve issues of space-filler, and you can tell that the writers had totally run out of steam by that point. There's a lot of arglebarle and fooferall about Dick being terrified of Two-Face, for some reason that is hinted-at but never explained, and it all ends just as you would expect it to, with Bruce coming back and saying "Hit the bricks, kid! I'm Batman again!", and all is right with the world. Plus, this final volume just ENDS, just like that....it felt like there was a missing page or two or three that DC just forgot to include. (There may be....you never know with DC these days.) I would have preferred that DC leave out PRODIGAL entirely, and rejigger the three KNIGHTFALL books to include the missing chapters that focused on Bruce Wayne and his recovery, but, what's done is done.....This is what we've got, and it's not bad, all things considered. Not as good as I remembered it being two decades ago, but....what is?

Posted by The Crabby Reviewer at 4:09 PM