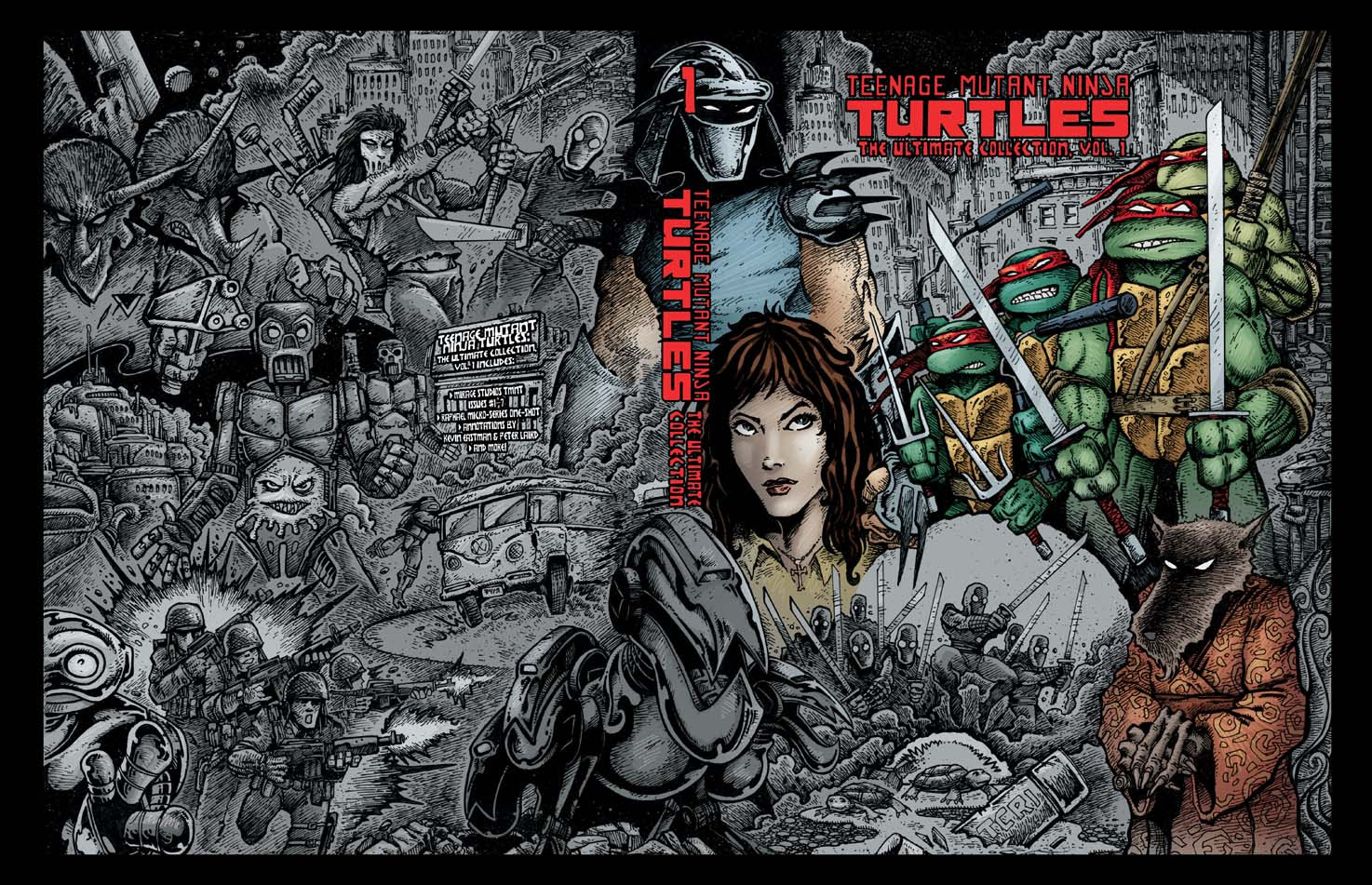 
I don't know what possessed me to buy this thing. I mean, I liked the Teenage Mutant Ninja Turtles well enough when I was a teenager myself (I was lucky enough to have first printings of all of the issues collected in this hardcover...), but there's no way that this stuff could possibly hold up nearly 30 years later, right?

Well, either the nostalgia overcame me, or this stuff actually holds up very well.

TEENAGE MUTANT NINJA TURTLES: THE ULTIMATE COLLECTION, VOL. 1 collects issues 1-7 of the Mirage Comics series, as well as the RAPHAEL micro-series one-shot. This is a nice, oversized hardcover, and the first thing that caught my eye was how much Kevin Eastman & Peter Laird's artwork benefits from being blown up to this larger format. The thick, chunky lines look marvelous at this size, and the paper stock is light-years beyond the crude newsprint that I'm used to seeing these issues on.

Each issue in the collection is followed by brief comments from creators Eastman and Laird, as well as page-by-page story annotations. The annotations leave a lot to be desired...It was like watching a Blu-Ray where the Director's commentary consists mainly of pap like "We had so much fun shooting this scene." There were pages that cried out for an honest commentary, such as Baxter Stockman's attempted bombing of various New York City buildings, including The World Trade Center. I would have figured that Eastman & Laird would have something insightful to say about that, but not so much. The behind-the-scenes commentary is decent, but not particularly enlightening. There's no mention of the book starting out as a parody of Frank Miller's DAREDEVIL and RONIN whatsoever. Don't buy the book looking to learn anything useful from these two.

Instead, you should buy the book because this is a well-done comic that is historically important, and deserving of a high-quality presentation.

On the crabby side, I remember most of the original issues as having wraparound covers....IDW only presents the front half of the covers, which annoyed me to no end. Also, there's mention of TMNT #7 having a color section that was inked by Richard Corben, and that's not included here. Why leave it out? I remember it as being only a few pages long...why not include it? Also, Mirage had a one-shot called FUGITOID that ties heavily into the issues included in this volume, and it's not included here. It's briefly mentioned in the commentary that the issue was deemed unnecessary because the flashbacks in TMNT give the reader all that they need. I disagree. It should have been included, and it's omission makes this, in my OCD opinion, far from an "Ultimate Collection".

Those quibbles aside, this is a FUN book.

I was amazed to rediscover some facts that had been lost to the mists of time in the past 30 years, such as the way that the Turtles made short shrift of The Shredder, who has since become their arch-enemy, in their first encounter, as well as the fact that The Krang were not bad guys in the original stories. Within these pages, we're introduced to The Foot Clan, The Shredder, Casey Jones, April O'Neil, The Krang, Baxter Stockman, The Mousers....this is a veritable feast of inventive small-press storytelling. I had a blast reading these issues again, and now I feel like I have to run out and buy the rest of the volumes in THE ULTIMATE COLLECTION. My poor wallet....

Posted by The Crabby Reviewer at 11:33 AM