Hellboy In Hell, Volume 1: The Descent 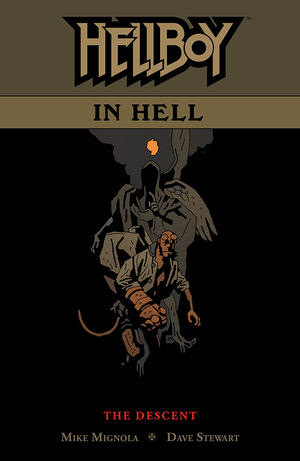 Hellboy goes exactly where he was made to be, quite against his will, in Mike Mignola's latest epic, HELLBOY IN HELL, VOLUME 1: THE DESCENT.
When we last saw Hellboy, in 2012, he had discovered that he was a descendant of King Arthur, and took up Excalibur against an army of the dead and a Dragon before being killed by Nimue. HELLBOY IN HELL opens where the last volume left off, with Hellboy dead, and consigned to hell.

Mignola is clearly having a grand old time here, riffing on classic Victorian literature such as A CHRISTMAS CAROL, while liberally borrowing plot devices from such disparate places as MACBETH and THE DIVINE COMEDY. Mignola turns a flummoxed Hellboy loose in an empty Hell with Sir Edward Grey as his guide, a Victorian Virgil to Hellboy's Dante. This volume is mostly groundwork for whatever Mignola has planned for the future, but what groundwork it is.Hellboy and Grey explore the deserted city of Pandemonium, encountering Satan and a few other demonic stragglers, and battling some familiar faces from Hellboy's past.

It's great to see Hellboy and Grey finally cross paths...it's too bad that it has to be under such tragic circumstances, and in such a terrible place. It also begs the question: How could two men, who have done so much good work, find themselves consigned to Hell for all eternity? We find out that Grey was literally dragged to Hell by a demon that he had vanquished, but is Hellboy's current predicament merely an unfortunate side-effect of his unholy lineage? That hardly seems fair.....but Mignola hints that Hellboy, and Grey, to a lesser extent, have three tasks ahead of them, so perhaps salvation will be a possibility, once their work is done.

HELLBOY IN HELL, VOLUME 1: THE DESCENT collects issues 1-5 of HELLBOY IN HELL, and features a cover gallery and an extensive Mike Mignola sketchbook. Highly recommended.


Posted by The Crabby Reviewer at 6:02 PM