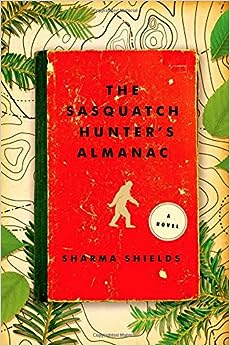 I'm not generally a fan of the sub-genre of "Magic Realism".....In fact, just the term "Magic Realism" is enough to turn me right off from any book that I see it applied to. So I headed into Sharma Shields' THE SASQUATCH HUNTER'S ALMANAC with a healthy dose of trepidation, which was lessened only by my love of all things Cryptozoological.


I was pleasantly surprised by how much I enjoyed this book. I may even go past enjoyment and say that I loved it.

Shields tells a multigenerational story that is propelled along by the obsession of Eli Roebuck, a man who is consumed with proving that Bigfoot exists.

The book opens up in 1943, when young Eli's mother brings home a strange-looking, shabbily-dressed stranger who she introduces to Eli as "Mr. Krantz". After a bizarre afternoon spent with this most unusual guest, Eli's mother accompanies Mr. Krantz into the woods, disappearing from young Eli's life forever. Returning home to find his wife gone, Eli's pragmatic father does his best to raise his son alone, never knowing that Eli suspects that Mr. Krantz was, in fact, a Sasquatch.

Eli grows up to become a respected Podiatrist, but never lets go of his obsession with discovering proof of Bigfoot's existence, founding a Cryptozoological organization and writing books to aid in his ultimate quest, which is to find and kill the creature that took his mother away from him.

Shields tells the story of Eli and his family through brief vignettes that read almost like short, feverish horror stories. Each member of Eli's family, his father, his wives, his daughters, even his mother, is ultimately haunted by a strange creature of their own, resulting in episodes that range from darkly comic to positively horrific. Even Mr. Krantz himself is not immune from the obsessions and manias that plague Eli's extended family.

One of the major hurdles that I had to overcome reading this book was Shields' depiction of Bigfoot (Mr. Krantz) as wearing clothes and living a semi-civilized life. (As the novel progresses, Mr. Krantz actually moves into a condo....) i found this to be ridiculous at first, but as the novel went on, I was able to just accept it and run with it, and by the end, it all fit perfectly. Shields has crafted a strange, hallucinatory world inhabited by flawed, obsessed people who all ring completely true. As out-there and bizarre as they may act, they all feel totally human.

Even the mysterious Mr. Krantz.